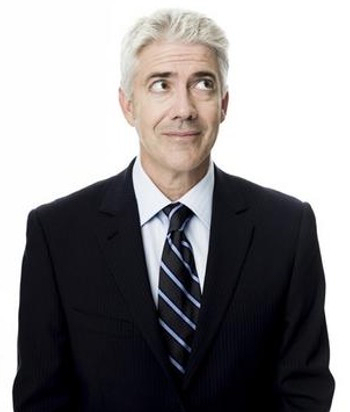 "That was Randy Twiss, dressed as Quasimodo, changing a car tyre, singing the Lord's Prayer."
"Like a stuttering owl with laryngitis, I couldn't give two hoots."
—The Man Himself
Advertisement:

Shawn Patrick Micellef (born 18 July, 1962 in Adelaide, Australia) is an Australian actor and writer of TV shows The Micallef Program, Micallef Tonight, and NEWStopia, host of Talkin' 'bout Your Generation and Shaun Micallef's Mad as Hell along with starring in and producing Mr & Mrs Murder. Australia's answer to Stephen Fry, he makes frequent use of wordplay, non-sequiturs and subversion of audience expectations.

Though initially keeper of a small but loyal fanbase, he has in more recent years risen to the public attention in Australia.

With his frequent collaborators, his roles typically involve him assuming the role of 'Shaun Micallef' (quite successfully), a pompous and self-obsessed man who is a satire of whatever role he is taking on at the time. This is however not a case of Adam Westing because Shaun isn't widely believed to be like the Micallef character.

He is also known as an actor, having starred in the short lived Welcher & Welcher series, the final series of Sea Change, Mr & Mrs Murder, as well as several films. He also had two cameos in Danger 5.