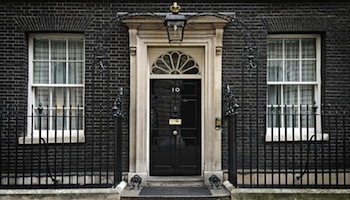 British Prime Ministers. A varied lot, be it in the areas of appearance, influence, time, origin, personality, politics or even personal lives, though a lot went to Eton or Harrow and then Oxbridge. They have had a great deal of impact on worlds both real and fictional and rank second only to The Presidents of the United States in being the most influential and well known Western world leaders.

Downing Street, by the way, is named after Sir George Downing (1623-84), a major schemer whom Samuel Pepys called a "perfidious rogue". Yep, jokes have been made about that. Before becoming the headquarters of the PM, Number Ten itself was the site of a pit used for cockerel fighting; that's right, Number Ten used to be a meeting place for crooks. Jokes have been made about that as well. The house is actually several old houses joined together, one of which (known as 'the house at the back') was formerly home to both Oliver Cromwell and King William III.

Note that the title "Prime Minister" did not come into formal use until the 20th century, the original title being First Lord of the Treasury (a lot of early Prime Ministers also held a second job in the cabinet), a title the PM still holds. Walpole is generally considered the first PM, but many early such figures did not use the title. In fact, the term "Prime Minister" was originally used as an insult for the figure. It was only by the time of Campbell-Bannerman that it became the official title.

Between about 1895 and 1920 the Conservatives and their Liberal Unionist allies were labeled 'Unionists' by the press (and indeed themselves). For convenience's sake Unionist PMs such as Balfour are listed as Conservatives. (Also, the Conservatives merged with Irish Unionists in the 1910s.)

As you will no doubt notice, technically this page should be called The Men and Women of Downing Street.note Although considering Thatcher's reputation, the joke was that she was more man than most of her Cabinet...

Advertisement:
A list of British Prime Ministers, with pages linked for those who have had a significant impact in their own time and/or one in worlds of fiction.
Prime Ministers of the Kingdom of Great Britain

18th-century Prime Ministers came and went at a rate of knots, as the favours of the reigning monarch wavered. It wasn't until the "madness" of George III and the hedonistic rule of George IV (roughly 1810-1830) that the Prime Ministers began to actually run the country...

George I and II

Prime Ministers of the United Kingdom of Great Britain and Ireland