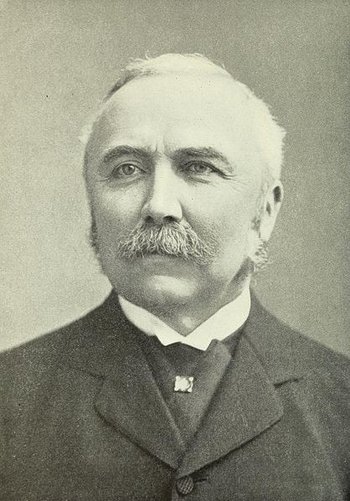 "I have never met a great public figure who so completely won the attachment and affection of the men who came into contact with him. He was not merely admired and respected; he was absolutely loved by us all. The masses of the people of the country, especially the more unfortunate of them, have lost the best friend they have ever had in the high place of the land. ... He was a truly great man. A great head and a great heart. He was absolutely the bravest man I ever met in politics."
— David Lloyd George
Advertisement:

Sir Henry Campbell-Bannerman, GCB (7 September 1836 – 22 April 1908) was a British Liberal Party politician who served as Prime Minister of the United Kingdom from 1905 to 1908 and Leader of the Liberal Party from 1899 to 1908. He also served as Secretary of State for War twice, in the Cabinets of Gladstone and Rosebery. He was the first First Lord of the Treasury to be officially called "Prime Minister", the term only coming into official usage five days after he took office, although the term is now retroactively used to apply all the way back to Sir Robert Walpole in 1721. In the time of William Pitt The Elder, the term "prime minister" was an insult used to mean "the king's favourite creep".

Known colloquially as "CB", he was a firm believer in free trade, Irish Home Rule, and the improvement of social conditions. Following a general election defeat in 1900, Campbell-Bannerman went on to lead the Liberal Party to a landslide victory over the Conservative Party at the 1906 general election, also the last election in which the Liberals gained an overall majority in the House of Commons. The government he subsequently led passed legislation to ensure trade unions could not be liable for damages incurred during strike action, introduced free school meals for all children, empowered local authorities to purchase agricultural land from private landlords, and oversaw the Entente with Russia in 1907. In that same year, he became the Father of the House (Member of Parliament with the longest continuous service — he had represented the constituency of Stirling Burghs since 1868), the only serving British prime minister to do so (David Lloyd George, Winston Churchill, James Callaghan, and Edward Heath would earn the Fatherhood after their respective premierships ended). Campbell-Bannerman resigned as Prime Minister on 3 April 1908 due to ill health and was replaced by his Chancellor of the Exchequer, Herbert Henry Asquith. He died nineteen days later before a successor was formally appointed, and is the only prime minister to die at 10 Downing Street (even if he was technically the former prime minister at the time).