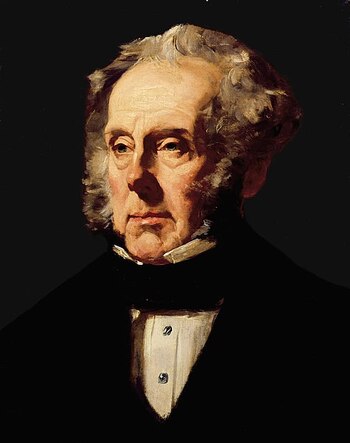 "Die, my dear doctor. That is the last thing I shall do."
— Last words
"That's Article 98; now go on to the next."
— Other possible last words
Advertisement:

Henry John Temple (20 October 1784–18 October 1865), 3rd Viscount Palmerston, KG GCB PC, popularly nicknamed "Pam", he was in government office almost continuously from 1807 until his death in 1865, beginning his parliamentary career as a Tory and concluding it as a Liberal.

He directed Britain's foreign policy (as Foreign Secretary and Prime Minister) when it was at the height of its power. Many of his actions were highly controversial then as now. They include:

In early October 1865 Lord Palmerston caught a chill and a violent fever and died two days short of his 81st birthday. He got a full state funeral, the fifth person not royalty to be granted a state funeral (after Admiral Robert Blake, Sir Isaac Newton, Lord Horatio Nelson, and Arthur Wellesley.)

The Viscount Palmerston in fiction: