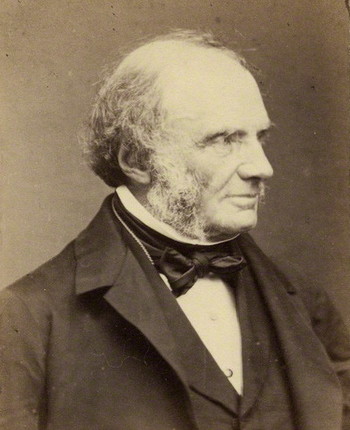 John Russell 1st Earl Russell, KG GCMG PC (18 August 1792 – 28 May 1878), known as Lord John Russell before 1861, was an English Whig and Liberal politician who served twice as Prime Minister of the United Kingdom in the mid-19th century. He was canny in opposition but had difficulty keeping his party together.

He came from the bluest of Blue Blood in 19th-century Britain; his father was the 6th Duke of Bedford, a title established in the time of Queen Anne, as a kind of promotion from the previous title of Earl of Bedford (granted to an ancestor for being a close advisor to none other than Henry VIII), the 1st Duke having been a significant moderate figure in the English Civil War (a pragmatic Puritan like his father, he flipped from Parliamentarian to Royalist in 1643). The family remained prominent through the years, often holding posts in government (the 6th Duke, for instance, was Lord Lieutenant of Ireland); they were also noted Whigs, with a reputation for minor unorthodoxies (for instance, although they "officially" attended Church of England services, the Russells were generally Presbyterians in private). However, John, as a younger son, had no title of his own; he earned the earldom for his service to the Crown, thank you.

He is one of only five university-educated British Prime Ministers to have not attended Oxford or Cambridge (the others being the Earl of Bute, Andrew Bonar Law, Neville Chamberlain and Gordon Brown). Like Brown, he attended the University of Edinburgh, although unlike Brown he didn't get a degree.

He was one of the principal leaders of the fight for the Reform Act 1832 and got the nickname Finality Jack for constantly saying it would be the final measure needed.

When he was in the opposition he was able to knock the base of Sir Robert Peel's government by coming out in favour of repeal of the Corn Laws, making him look like the leader of the measure and leading to the split in the Conservative party and the Whigs returned to power.

The victory was short. His power base was unstable and his leadership ineffectual. Russell got very little of what he wanted to get passed passed.

After a short-lived minority Conservative government under The Earl of Derby, Russell brought the Whigs into a new coalition government with (ironically) the Peelite Conservatives.

During this time he was, along with The Viscount Palmerston, instrumental about getting Britain into The Crimean War, but the incompetence of the leadership led to the destruction of his government and Palmerston formed a new government. Although Russell was initially included, he did not get on well with his former subordinate, and temporarily retired from politics in 1855, focusing on writing. In the meantime, the Peelites merged with the Whigs, forming the Liberal Party and bringing considerable talents with them (among them a young William Gladstone).

When Palmerston died in late 1865, Russell again became Prime Minister. His premiership was short and even more annoying than his first term had been, much of what he wanted to do was later done by The Earl of Derby and Benjamin Disraeli. Then his grip on the party failed again, the party split and he retired for good.

His grandson, the 3rd Earl Russell, was Bertrand Russell, the philosopher and pacifist; he and his wife actually raised Bertrand and his older brother Frank after their parents died young. The Earls Russell have since become something of a curiosity among the Peerage, as seemingly congenitally attached to the Left as most peers are to the Right; the 6th Earl was a Labour councillor in Waltham Forest, advocated for the abolition of the House of Lords, and was considered to be on the left wing of the Labour Party before his untimely death at the age of 45; his brother, the 7th Earl, is less radical, but was still a Liberal Democrat candidate for the London Assembly in 2012. Seems rather strange indeed for a family that can trace itself back to an Earldom established for loyalty to The House of Tudor.

The Earl Russell in media