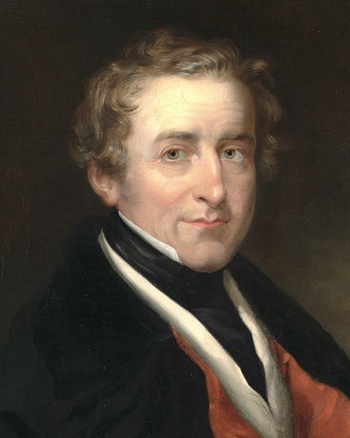 Sir Robert Peel, 2nd Baronet (5 February 1788 – 2 July 1850) was the first Conservative Prime Minister of the United Kingdom. He helped create the modern concept of the police force while Home Secretary (leading to officers being known as "bobbies", in England, or Peelers, in Ireland, to this day), oversaw the formation of the Conservative Party out of the shattered Tory Party, and repealed the Corn Laws.

He also reformed the criminal law, slashing the number of crimes punishable by death, amalgamating lots of laws together into what are now known as Peel's Acts. He also reformed prisons, paying gaolers rather than have them operate by highly formalised bribes and introduced education for the inmates.

He was a strong opponent of Catholic emancipation, but by the time he was in a position to do anything (under his good friend The Duke of Wellington) it was too late to fight the swell of opinion. Initially got off on a bad foot with Queen Victoria due to trying to interfere with the appointment of her Ladies of the Bedchamber, which Peel saw as a political appointment (because they were mostly the wives and daughters of his Whig political opponents) and Victoria considered to be outside the remit of Parliament. They mellowed towards each other later on, particularly when Peel became good friends with Prince Albert. He was also subject to a case of Actually, I Am Him that saved his life—an assassin named Macnaghten mistook Peel's secretary Drummond for the man himself and shot him dead in 1843. (The man's case gave us the first rules

under The Common Law for the Insanity Defense.)

His first premiership was hamstrung by being a minority government and lasted less than a year. His second one came to power after a mass of government debt and a collapse in faith in the banking system. He fixed this with taxes and tariffs. After attacking the supporters of his opponents (the factory owners and industrial leaders) he then acted against the landed gentry by repealing the protectionist Corn Laws, an act that brought down his government.

Peel's preference for economically liberal policies later in his premiership — the most notable of which was the repeal of the Corn Laws — led to the establishment of the Peelite faction of Conservatives, which gradually merged with the Whigs and Radicals into the Liberal Party; one of the most notable leaders of the Liberals, William Gladstone, was one of Peel's disciples as a young man.