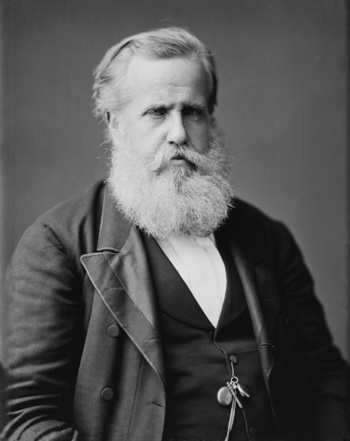 Pedro de Alcântara João Carlos Leopoldo Salvador Bibiano Francisco Xavier de Paula Leocádio Miguel Gabriel Rafael Gonzaga de Bragança e Habsburgo (December 2, 1825 - December 5, 1891) was the second and last Emperor of Brazil. Born the seventh son (and only male to survive infancy) of the previous Emperor Pedro I and his wife Maria Leopoldina of Austria, he inherited the throne at very young age (a whooping 5-years old) when his father abdicated the Brazilian throne to restore peace in Portugal (he was the previous king's heir and a Succession Crisis was underway). While his father's best friend ruled the country as regent, young Pedro II was left in charge of a country on the brink of disintegration: disputes between political factions and several rebellious movements took place all over the country that threatened to secede whole states from the Empire. In order to restore stability, the Parliament rushed Pedro's coronation when he was still 14-years old before he could officially reach manhood. His reign spanned over 50 years and saw Brazil becoming a emerging superpower in the international theater, winning three international conflicts (the most notorious being the War of the Triple Alliance of which he personally coordinated the troops) and ushering a time of prosperity for his people, the likes of which their Hispanic neighbors could only dream of.

Pedro was a man of progress, an advocate of abolition, free speech, arts and science, as result of his preparation from an early age to rule. He was personal friends with contemporary artists and inventors such as Richard Wagner and Alexander Graham Bell (who managed to amaze the monarch with his telephone) and was admired and looked up to by intellectuals like Charles Darwin, Victor Hugo and Friedrich Nietzsche to name a few. Pedro invested in scientific advances, provided scholarship for Brazilian students to study at universities and colleges and founded the Imperial Academy of the Fine Arts. He held the distinction of being one of the three heads of states besides Peter the Great and Napoléon Bonaparte note who incidentally happened to be Pedro's own uncle for marrying one of Maria Leopoldina's sisters to being elected to the French Academy of Sciences.

Pedro's long rule came to an end in 1889 following the abolition of slavery, which had eroded the support of Brazilian wealthy class (and, consequently, the larger part of the professional military forces which were largely made up of wealthy officers), who began pushing for the deposition of the emperor and the establishment of a Republic to protect their interests. Despite having the public support of the commoners and the recently freed slaves (who equated the monarchy with freedom for their part in the abolition), the emperor did not resist in order to prevent a potential civil war from erupting and in no small part of growing weary of his role as monarch, as he leads a very grim and lonely childhood with his mother dying in childbirth and his father leaving him at a very young age and dying a little afterwards. It also didn't help that he had no male heir on which to bestow the throne: both of his two sons died young, and while his daughter Isabel was smart, he didn't believe a woman was up for the task of ruling. All of which convinced him early on that his throne wasn't something that ought to be continued.

And so in a very bizarre situation, he ended up abdicating in a bloodless coup even though he was still highly regarded by his own people - even the very Republicans who deposed Pedro saw him as a role model and tried to emulate him. Pedro would soon die two years after in Paris, and the whole nation mourned when news reached the fledgling Republic. His still-living descendants are the House of Orleans-Braganza currently living in France and are still claimants to the throne.

He is widely regarded as The Good King today as he was back then, is characterized as a man of admirable integrity, intelligence and a strong sense of duty and loyalty to his people, which were immensely reciprocated. While following Brazilian leaders were viewed in a more divisive manner either by its contemporaries or historians, the general opinion on him is exceedingly positive: he has been repeatedly used as the standard for which leaders were measured, with historians cynically pointing out that the long string of dictators and despots that followed failed to live up to him - even though nobody really argued to restore the monarchy back (technically there was a referendum in 1993 asking whether the people preferred the monarchy or the republic and more than 80% voted for the latter). Pedro is specially admired for being ahead of his time and much of his progressive legacy remains to his day and serve as foundation for Brazil's rapidly rising status as regional power. As such he often tops the list of greatest Brazilians who ever lived, if not filling the number one position himself.

Pedro II has been seen in the following works: