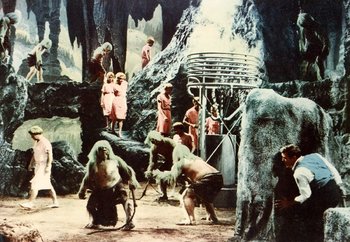 Behold the future of humanity: savage, cannibalistic predators and meek, effete prey!
"The too-perfect security of the Upper-worlders had led them to a slow movement of degeneration, a general dwindling in size, strength, and intelligence."
— H. G. Wells, The Time Machine
Advertisement:

Evolution isn't goal-directed. Sometimes the directions it takes, in Real Life and in fiction, can be surprising. Certain species of New World monkeys, for example, re-evolved secondary claws from their fingernails, having lost their true claws earlier in their evolution from more Prosimian-like ancestors. Similarly, in fiction, a species (often but not limited to humanity) will sometimes evolve into a more feral, less civilized, sometimes even non-sapient variety, regaining "primitive" characteristics. These "primitive" characteristics can include behaviors and/or physical traits. Whether or not the result of this evolution is still recognizably related to the parent species varies from work to work and species to species.

This trope tends to be expressed in a matter of degrees. Most basic is the scenario common to post-apocalyptic settings After the End, where humanity (or another species) is still physiologically more or less the same, but society has collapsed and technological and cultural regression have set in. The people are living a more primitive existence than their more technologically and culturally advanced ancestors. They may even intentionally evoke a "tribal" aesthetic, and may raise a Barbarian Hero or two. The scruffy survivor of a Scavenger World is usually not an example of this trope, but the tribe of abandoned feral children he meets in the wasteland — well, they're headed down this path.

In more extreme scenarios, the population may have evolved into a new subspecies or another species altogether with more "primitive" or "feral" behavioral and physical characteristics than their more "civilized" ancestors. The change may be subtle (like increased muscle mass, more body hair and a neanderthal-like face) or much, much more radical. Whether these changes in the population constitute a new species or are simply a variation or subspecies of the original depends on the work, but typically most Scavenger World-type future settings are not far enough removed from the Present Day for natural selection to favor such drastic changes.

May overlap with Was Once a Man. Sometimes, it's the motivation of an Evilutionary Biologist to try and take control of evolution in order to avert this fate. For more extreme cases, where higher intellect is lost altogether, see Formerly Sapient Species.

Common to After the End settings. Likely to exist in Humanity's Wake, and primitives of the ice age sort are likely to turn up in the wake of a Glacial Apocalypse.

Contrast Evolutionary Levels, Ultimate Lifeform and The Singularity (all of which tend to assume evolution's a linear, goal driven process). Has nothing to do with the effects of a Devolution Device. The change must be a result of cultural and/or biological evolution; it cannot be the result of a Devolution Device or other similar transformation on an individual or a group.

Please note that for an example to fit this trope, it must feature an entire population subjected to evolution (whether that evolution is cultural or also physiological). Isolated persons raised by animals or left to fend for themselves in the wild would not count. Neither would any creatures created by a Mad Scientist by combining human and animal traits (such as in The Island of Doctor Moreau and its various adaptations and homages in science fiction works). A virus with the same effect on individuals as a Devolution Device would not be an example of this trope. This trope applies to populations, not individuals or groups with too small a gene pool for viable reproduction. However, evolution does not have to be portrayed realistically for this trope to apply. "Evolution" can work however the writer wants it to work in his/her 'verse, so long as it's stated to be evolution, and not the result of some other process or event, like a Mad Scientist's experiments, a Devolution Device, or a transformative virus. However, if a gradual change began with experimentation, or a virus, etc., which altered the terms of natural selection, resulting in a dramatically altered evolutionary trajectory, it would count as an example.

Also note that in Real Life, as already stated, evolution is not goal directed; the only "value" of a trait in evolutionary terms is how much that trait enhances the fitness of an organism or its offspring. Like this trope, real evolution can involve the loss of traits as well. For example, parasitic leeches often lack many traits in comparison to their free-living cousins, which include other annelid worms like earthworms and beachworms. This is because these traits, unnecessary for the parasitic lifestyle, had no fitness advantage; it's possible they even detracted from a parasite's fitness. This does not mean that parasitic leeches are any more or less "evolved" than non-parasitic annelid worms. In evolutionary science, "primitive" simply means "retaining ancestral traits." And events like Anthropoid monkeys evolving secondary claws from their fingernails are the rare exception, not the rule.