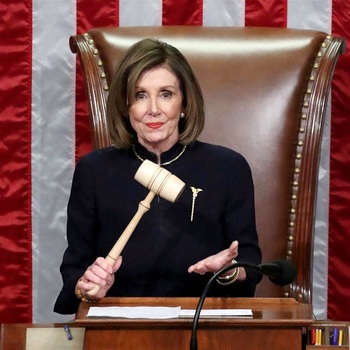 Madam Speaker.
"The women who did all of this— ... We hold them up as icons. But what we hear people say is, ‘Yes, they were icons. You are troublemakers.’ ... But I can just tell you, a troublemaker with a gavel — that’s the real difference."
— interview with the Washington Post

Nancy Patricia Pelosi (nee D'Alesandro, born March 26, 1940) is an American politician serving as Speaker of the United States House of Representatives since 2019, and previously from 2007 to 2011. Pelosi has served as a U.S. representative from California since 1987. A member of the Democratic Party, she is the only woman in U.S. history to serve as Speaker and she was the highest-ranking female elected official in United States history until Kamala Harris became Vice President. Her two non-consecutive tenures as Speaker also made her the first former Speaker to return to the post since Sam Rayburn in 1955.

She is married to Paul Pelosi and they have five children.