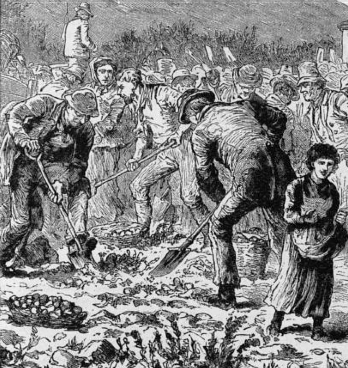 How many potatoes does it take to kill an Irishman? Zero.
— Dark historical joke
Advertisement:

Irish people, so media would have you believe, love their potatoes. This does bear some Truth in Television, but the reasoning is less a cultural preference and more a matter of necessity.

Humans can live on six regular-sized potatoes and a glass of milk (or a bit of cheese) a day (a handful of vegetables can make up the mineral balance). However, in 1845 more than 90% of the world population was illiterate, dirt-poor, lived in the countryside and worked the land – business as usual for humanity through most of its history, in other words. This only really began to change in the very last decades of the 19th century, when people in Britain and northwestern Europe became increasingly semi-literate and worked in towns and cities, but remained dirt-poor. In the British Isles, natal mortality (~15%, both for mother and child) and child mortality (~50% before age 10) were also bog-standard.note The former rate didn't stay below 1% until after the National Health Service was founded in 1946, largely as a response to the devastation of World War II, aided by the proliferation of commercially-available antibiotics such as Sulfa drugs in the late 1930s and mould-based Penicillin V in the mid-1950s.

However, Ireland was even worse off: half the island's 1845 population of eight million were farmers who worked land owned by someone else, and had to pay rent and tithes. The latter was 10% of a farmer's produce value, paid to the (Protestant) Church of Ireland every year, regardless of religious affiliation. On paper, it sounds decent enough... but privately-owned enclosures and the Penal Laws (imposed on Irish Catholics after the Williamite Wars) forcing the Irish to divide all their land between their sons resulted in ever-smaller plots of land being cultivated with increasing intensity, exhausting the soil without allowing it respite. Worse still, agricultural science was still in its infancy and tenant-farmers in particular became increasingly reliant on just a handful of varieties of potato-crop to make their living. This was okay for a while – a one-acre plot of potatoes could, if worked properly, feed a family of four for the year when supplemented with some dairy (usually in the form of cheese) and a smattering of vegetables (typically cabbage, which grows well in Ireland and is ludicrously nutrient-dense).

So when potato crops failed, people became malnourished, got sick, and died. Malnutrition has a number of ill effects on the body, but these are particularly pronounced with those who tend to die the most under normal circumstances – mothers in labor, children under 10, and the elderly. Susceptibility to disease skyrocketed as people's immune systems were weakened and infant mortality rates also soared – undernourished mothers aren't so good at coping with blood loss and underweight babies are more frequently stillborn or sickly. Miscarriages also increased, of course.

The primary cause was a disease which killed certain types of potatoes – the "Potato Blight". The limited number of potato breeds in use meant that the entire crop in several counties was 100% susceptible to the disease. "Science" was a bit of a joke at the time – it only really took off 30-50 years later – but we now know it was a fungus-like "oomycete"note Oomycetes (historically called "water molds") are a strange group of microorganisms which are oddly fungus-like but not terribly closely related to fungi; fungi are more closely related to animals than they are to these things, and oomycetes are for their part most closely related to brown algae like rockweeds.. This particular strain was almost certainly Phytophthora infestans (aka "Late Blight"), which probably came from tainted American imports (which also suffered from the blight two years prior). The disease rocked all of Europe's potato crop (Belgium lost nearly its entire harvest), but most of the other countries could fall back on other staples, particularly grain. Ireland, however, was almost entirely reliant on potatoes.note Irony of ironies, though, cereals crop failures struck Europe soon after the potato blight hit. This, plus an economic depression caused by the crop failures, is why the 1840s are often called "the Hungry Forties" in European historiography—and why the Revolutions of 1848 happened when they did.

The first year wasn't too bad, as there were still stocks left over from previous years (and the efforts of the Church and other concerned groups made up some of the gap). But farmers' hopes that the next harvest would be better fell apart as blight once again struck (fungal spores remained in the soil even after the infected plants had been removed). It's estimated that in 1846, the losses increased to somewhere between a third to half the entire crop. The loss rate increased again in 1847, and by 1848 people had eaten virtually the entire stock of potatoes that were supposed to be planted/sown that year (not that it would've worked out, of course). In other words, while the amount harvested had exponentially decreased from 1845-1847, in 1848 there was almost literally no food left in the areas that had relied largely if not solely on potatoes (i.e. most of the country). And to further rub salt in the wound, the symptoms of the blight only appear late during the potato's growing cycle, so by the time it is detected, there is not enough time to plow the land over and sow another crop. 1847 is still known in folk memory as "Black '47" for this reason.

The response from Westminster, which was then very big on "hands-off" classical liberal/libertarian-style government, was frustratingly slow and hamstrung by efforts to distinguish between the "deserving" and "undeserving" poor. The government largely trusted that things would work out and decided not to buy and distribute free food to all the people or cease exports of food from Ireland because that would undermine the principles of Free Labour (honest work for honest pay) and Free Market (the economy will provide for everything because the nobility shall surely open their purses out of the goodness of their hearts). This was a marked contrast to an older, tried-and-tested approach to famine relief, which was demonstrated during the Isles' last period of famine during the reign of Queen Elizabeth, when a famine of similar severity (in England) had been countered by the establishment of the Royal Granary and bulk purchase of grain from across the Baltic Sea, which was then distributed as needed.

Now, however, Westminster knew better than to just give citizens free food in an emergency and instead set up public works projects to reward already weakened farmers for hard labour. Not only did this increase calorie consumption at a time when they needed to conserve energy, thus effectively making them starve faster, but the primitive state of economics meant that no one even considered that perhaps the critical shortage of food meant that prices would increase, meaning that the already low wages the jobs offered were totally insufficient to actually keep the people working them fed and alive. This jaw-dropping lack of foresight and insistence on adhering to the Free Market remains a sticking point to this day.

By the time harvests finally recovered in 1849 with the introduction of strains of potato that were immune to the Blight, Ireland was three million souls short. About 1.5 million had died of disease and exposure (the winter of 1846 was particularly harsh) and the other half emigrated, largely to East Britain, as well as the United States and the rest of the Commonwealth, a pattern that would lessen after six decades or so but never completely dry up. Steady emigration and the largely agricultural (and thus poor) nature of the country – bar the semi-industrial northeast – meant that Ireland never exceeded its 1845 population-high of about 8 million, and the population would continue to decline steadily until 1962, over one hundred years later. The population of the entire island currently stands at 6.9 million.note Just to put it in perspective, the now 10-million-strong Portugal was just under 4 million in the 1840s. Had the potato famine never occurred, it's entirely possible that Ireland today would have even hit the 15 million mark, making it one of Europe's major countries.

Since starving farmers were naturally reluctant to pay their Church tithes and rent, the army was called in to do it on their behalf... when necessary, by force. Worse, many landlords weren't very sympathetic about the whole "sorry I can't pay the rent but I need this food so my family doesn't die" thing and evicted such folk anyway. The army (which was itself typically half-or-more Irish, much of the rest being Scots) actually had to be mobilised to prevent people from killing landlords who did this and to guard food exports, a predictable but extremely unpopular move that did a lot to further dim everyone's views of the government. The whole landlord and food-exporting thing also had a particularly unfortunate racial angle as many Anglo-Irish landlords lived in the east of the island or in East Britain, and many of them had intermarried with non-Irish peoples. While the truth is somewhat more complex, "England is taking our food from our kids' starving mouths" was an unsurprisingly popular sentiment at the time and particularly with the later rise of Irish nationalism.

Even to this day, there is debate as to whether or not this was simple callousness of the aristocracy or outright genocide. Those who call it the former point to Britian and other nations responding in similar ways to famines in other parts of The Empire. Others point to the above-mentioned racial and religious tensions between the ruling Protestant Ascendancy and the majority of Irish Catholics; the fact that Britain prevented foreign nations from giving aid; the fact that Ireland remained a net exporter of food during the famine; the long-standing laws that made Catholics in Ireland second-class citizens; the fact that someone like Charles Trevelyan, Assistant Secretary of the Treasury and as such the British administrator chiefly responsible for famine relief, said things such as "The greatest evil we have to face is not the physical evil of the famine, but the moral evil of the selfish, perverse and turbulent character of the Irish people", and the Malthusian belief current at the time that Ireland was poor due to overpopulation and that as a result reducing the Irish population was the solution. Whether or not it is a genocide depends on who you ask.

See also Red October (~8 million dead), The Chinese Civil War (~10 million) and the Holodomor (~2.4 million to 12 million dead) for some big helpings of Grand Famine and World War II for a delectable platter of smaller famines – chiefly the Yellow River, Bengal, Henan, and Gulf Of Tonkin famines (~2 million each) but also the barely-averted Soviet, Italian, Dutch, German, and Japanese famines.

The only bright spot to arise from this is that the famine left an indelible mark on the Irish, as they consistently rank among the most generous nations when giving food aid to other nation-states.