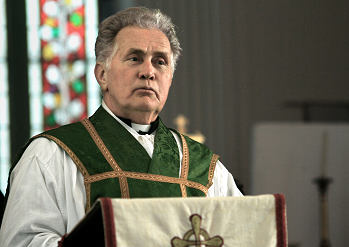 "We used to grow priests in Ireland. We used to grow them from bits of people that we didn't like. But we over-planted. We had an epidemic. We were flooded with them. So, we tried to engage the rest of the world in a priest-for-potato swap."
— Irish comedian Tommy Tiernan
Advertisement:

Irish Catholic priests or nuns, basically, turn up in a lot of places. It's like Ireland exports them.

This was indeed once very common back in The '50s and earlier when Ireland essentially did export clergy.note The Irish tradition of exporting Catholic clergy arguably goes back to the 6th century, when the sainted Irish abbots Columba and Columbanus evangelized and founded monasteries in Scotland and France, respectively. Both took significant numbers of Irish monks with them to help. In part this was due to the tradition of Irish priests and nuns going overseas both as students and missionaries and in part simply due to the very high emigration rate in Ireland (12.7 people per 1000 in 1950). It also runs with the stereotype, within Britain and the US, that Irish Catholics are particularly devout.

Having said that, this is definitely not the case today; changing demographics and the growth of secularism mean that these days, Ireland does not even train enough priests for her own needs, and has to import from Poland and Africa. Thus, unless the priest or nun is very elderly or is in a period piece, he or she is not too likely to be Irish. An exception is the United States, where even if priests who actually came from Ireland are fairly rare, Irish-descended clergy dominate the church hierarchy; there's a very good chance that any given American Catholic archbishop or Cardinal (both in fiction and reality) is Irish—it's something of a bit of a joke within the American Church that all the American Cardinals seem to trace at least part of their ancestry from the Emerald Isle.note Even where you wouldn't expect it—the Cardinal who ordered the construction of the current seat of the Archdiocese of Los Angeles is Roger Cardinal Mahoney However, the same is not true of the parishioners; religious surveys

done within the last ten years show that Irish Americans are one of the most secularized ethnic communities in America.note About a third of non-religious Americans claim Irish ancestry, as opposed to just 12% of the total US population. If one figures that about 15% of all Americans are non-religious, then that figure rises to more than 40% for Irish Americans — numbers comparable to the average Western European country. In addition, having been born and raised in America, Irish priests are unlikely to have a heavy Irish accent despite what you find on TV.

Nevertheless, stock characters die hard (as Officer O'Hara can attest), and even if doesn't make much sense any more, Irish priests abroad are not quite a Dead Horse Trope yet.

In terms of rank, the authority tropes arguably equal are Badass Preacher, Corrupt Corporate Executive, Preacher Man, Pedophile Priest, Schoolteachers Sexy Priest, Sinister Minister and The Vicar. For the next step down, see Student Council President. For the next step up, see Dean Bitterman.