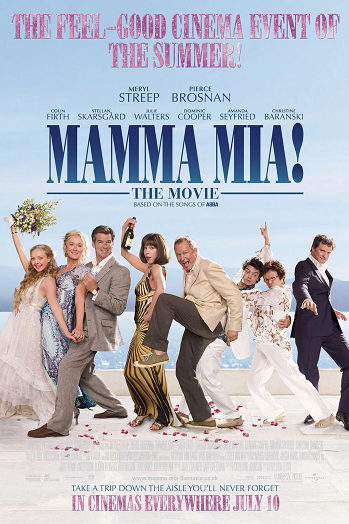 Who said a wedding couldn't be this much fun?
"Typical, isn't it? You wait 20 years for a dad and then three come along at once."
— Rosie
Advertisement:

The 2008 film adaptation of the ABBA Jukebox Musical of the same name.

The plot: 20-year-old Sophie (Amanda Seyfried) is the daughter of single mom and former rock star Donna (Meryl Streep). Sophie is getting married to Sky (Dominic Cooper) and wants her father to be at her wedding; unfortunately, she doesn't know who her father is, as Donna never told her. Donna herself doesn't even know, having slept with three guys right around the time she became pregnant: Sam (Pierce Brosnan), Harry (Colin Firth) and Bill (Stellan Skarsgård). Unbeknownst to her mother, Sophie invites all three possible dads to her wedding to try and find her natural father.

Throw in a Greek island, the other two members of Donna's former girl group (Christine Baranski and Julie Walters) and a dozen ABBA songs, and Hilarity Ensues.

Despite mixed reviews from critics, it was a hit with audiences, earning over $600 million at the worldwide box office. A sequel, entitled Here We Go Again, was released ten years later in July 2018.

Only The Rest Of Your Life

After Sophie decides she doesn't want to get married yet at the altar, Sam proposes to Sophie's mother Donna, who accepts.

Example of:
Why Waste a Wedding?

Only The Rest Of Your Life

After Sophie decides she doesn't want to get married yet at the altar, Sam proposes to Sophie's mother Donna, who accepts.