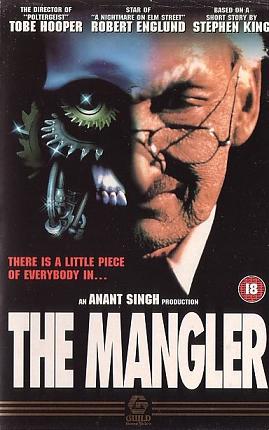 Sadly, there's no robotized Robert Englund in the film.
There is a fate worse than death.
Advertisement:

The Mangler is a horror film adapted from a short story The Mangler by Stephen King. Released in 1995, it was directed by Tobe Hooper and stars Robert Englund and Ted Levine. There are two sequels. What makes the film unique from the rest of the Stephen-King-novel-based-works is the fact the film is basically Event Horizon on a whole nother level and without Hyper Space Is A Scary Place and Came Back Wrong.

The first film has the examples of: