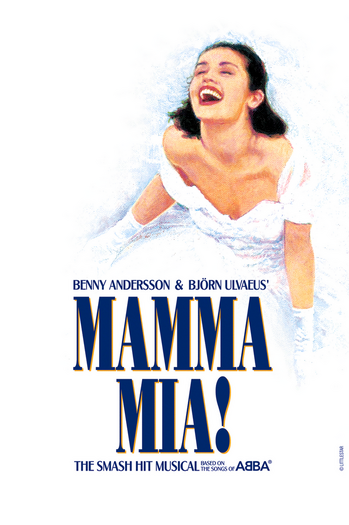 "Typical, isn't it? You wait 20 years for a dad and then three come along at once. "
— Rosie
Advertisement:

Mamma Mia! is a hit stage musical based around the music of ABBA.

The show is set on the fictional Greek island of Kalokairi, where 20-year-old Sophie is just about to marry her fiance Sky. However, she is conflicted because she doesn't know who her father is, and finds three potential suspects from her hotelier mother Donna's old diary: Sam, Bill, and Harry. Not wanting to marry without knowing her father, Sophie invites all three men to the wedding without her mother's knowledge.

As the wedding approaches, Sophie's Honorary Aunts and Donna's old friends Tanya and Rosie arrive just in time to support Donna in her time of need: after all, what is a woman to do when three of her exes show up at once, while she's trying to put a wedding together?

The show made its West End debut in 1999, and opened on Broadway in 2001. A film version starring Amanda Seyfried as Sophie and Meryl Streep as Donna was released in 2008.