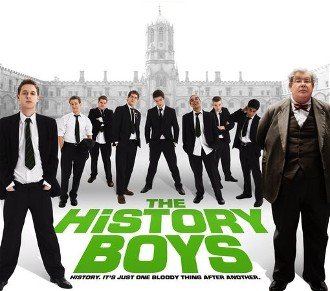 Dakin: Are we scarred for life, do you think?
Scripps: We must hope so.
Advertisement:

A stage play by Alan Bennett and later a 2006 film, The History Boys follows a group of mostly bright students from a Sheffield grammar school as they prepare to sit the Oxbridge examinations, all hoping to study history. Taught their facts by Mrs. Lintott and culture by the inspirational Mr. Hector, they suddenly find things shaken up by the arrival of the temporary contract teacher Mr. Irwin, who aims to get them through their exams by cheating.note Possibly. Throughout the term, issues arise between the different teachers and the headmaster about how and what the boys should be taught, while the boys themselves grapple with their relationships to their classmates, their goals and their teachers. The movie deals frankly with both student-teacher relationships and the perceptions of homosexuality in the 1980s, but despite its serious moments, it never loses its razor wit, ultimately managing to be both thought-provoking and fun.

The History Boys provides examples of: