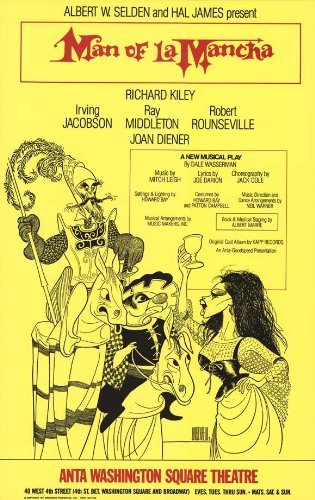 A 1965 musical based on Don Quixote, or more precisely, the man behind Don Quixote, author Miguel De Cervantes. One day, he and his faithful manservant are unexpectedly arrested by The Spanish Inquisition. As they await trial, their fellow prisoners put them on trial. With all of his possessions on the line, De Cervantes decides to put on a show as his defense. Care to guess which one?

With a little imagination, the dismal dungeon is transformed to rolling hills, as Cervantes and his servant — now none other than Don Quixote and Sancho Panza — set out in search of grand adventures and other derring-do. As they play at their routine, other prisoners take up roles suggested of them. In particular, the angry Aldonza, the Miss Yo-Yo Knickers of the "town," attracts Quixote's interest, and he rechristens her Dulcinea, his noble lady, upon the spot. She is less than amused, but can't help but be intrigued by his idealism... Meanwhile, back at the homestead, the relatives of Alonso Quijana fret about how to save their reputation from the mad fool who's running around the country trying to joust windmills.

Part of what makes the musical noticeable is the use of the Show Within a Show being the actual meat of the play.

There was also a 1972 film version directed by Arthur Hiller, starring Peter O'Toole and Sophia Loren.