Western Animation / The Adventures of Don Coyote and Sancho Panda 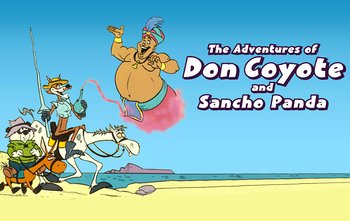 The intrepid heroes of this bizarre early Hanna-Barbara installment.
Advertisement:

The Adventures of Don Coyote and Sancho Panda is a 1989 cartoon produced and animated by Hanna-Barbera as part of its defunct cartoon programming block The Funtastic World of Hanna-Barbera.

Taking direct inspiration from the 17th-century classic novel about a delusional Spanish noble who fancies himself a knight and wishes to live a life bound by an honorable code, the main character is an anthropomorphic coyote who drags his dear panda friend Sancho throughout the countryside, seeking to gain fame as a valiant knight who can best any monster and save beautiful princesses.

This can only go well.