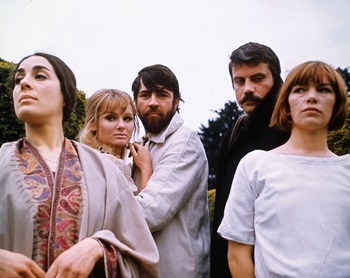 "To know is to human, and in death we do not know, we are not human. And the joy of this compensates for all the bitterness of knowledge and the sordidness of our humanity."
Advertisement:

It is a sequel to his novel The Rainbow (1915), and follows the continuing loves and lives of the sisters Gudrun and Ursula Brangwen. Gudrun Brangwen, an artist, pursues a destructive relationship with Gerald Crich, an industrialist. Lawrence contrasts this pair with the love that develops between Ursula and Rupert Birkin, an alienated intellectual who articulates many opinions that are associated with the author. The emotional relationships thus established are given further depth and tension by an intense psychological and physical attraction between Gerald and Rupert. The novel ranges over the whole of British society before the time of the First World War and eventually ends high up in the snows of the Tyrolean Alps.

Adapted into a 1969 film directed by Ken Russell from a screenplay by Larry Kramer (The Normal Heart), starring Alan Bates as Rupert, Oliver Reed as Gerald, Glenda Jackson as Gudrun, and Jennie Linden as Ursula. The film received four Academy Award nominations, with Jackson winning for Best Actress.