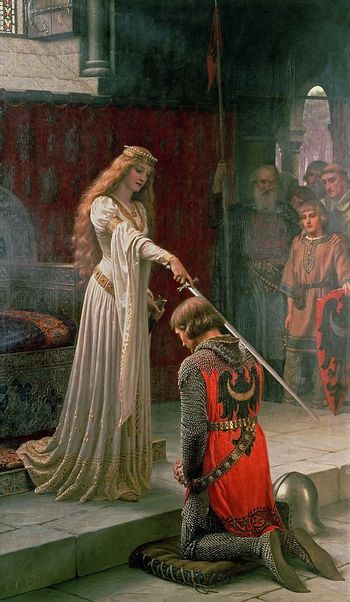 Many medieval and fantasy stories in the European tradition feature a Knight In Shining Armour, who in the name of chivalry sets out on a heroic quest such as slaying a fire-breathing dragon that's been terrorizing the country, or rescuing a princess who’s been kidnapped by an evil sorcerer. But where do knights come from? Unlike ownership of a fief or the title of royal prince, knighthood is not something you recieve at birth, or that you can inherit from a previous owner. First you have to earn it, and then the person in charge has to give it to you in a ceremony that follows the appropriate traditions and protocols.

Originally the word knight was a job description with no connotation of high birth or status: it merely meant a warrior who was skilled and wealthy enough to fight on horseback, and owed their service to someone powerful. The English word knight is derived from an Anglo-Saxon word for "servant", while most other European languages use a word meaning "horseman" (e.g. German Ritternote Cognate to English "rider" or French chevalier).note Interestingly, many languages straight-up borrowed the German or French word; most Slavic and Celtic languages use words derived from Ritter. Even more interestingly, some Slavic languages use a word that appears to have been based on a Proto-Slavic borrowing from the Proto-Germanic ancestor of the word viking. The word began to take on new meaning in response to social changes at the dawn of The High Middle Ages: the flourishing of merchants and cities gave them new wealth and power to compete with the nobility, while the Church became more assertive in trying to curb the misbehavior of the warrior class. In order to maintain their distinction from the class of people who worked, and to reconcile the violent nature of war with the ideals of courtesy and piety, the nobility and gentry absorbed the military role of knighthood while turning it into a more exclusive and regulated order.

A noble child would usually start as a page in order to learn discipline and manners, spend their teenage years as an arming squire taking care of a master's horse and equipment, and when they had grown into a fine warrior, they would be recognized as having earned their spurs. Not everyone became a knight through such careful grooming, though. Commoners could be rewarded with knighthood for exceptional service, and rulers facing a shortfall of heavy cavalry would sometimes make laws requiring anyone who possessed a certain amount of property to present themselves to be knighted whether they liked it or not. In any case, being knighted was often the most important day of one's life.

In the early days all that was needed was the dubbing, but the protocol quickly grew more elaborate. Expect a formal ceremony in a Standard Royal Court with masses of witnesses. In Real Life, these were highly religious events that involved the new knight having a night vigil (sleepless time with praying) in the chapel, ritualized bathing for cleansing, wearing certain colours (such as white) and a final blessing from The Church near the end. You'll see little of this because we don't have time for that. The actual event could go on for days, so again this is often shortened for time. But keep in mind that the shortened version also existed: a medieval noble or ruler serving as a field commander would often promote several deserving commoners and squires immediately before a battle, since one would go to great lengths not to fail his lord or sully his reputation in his first combat as a knight. Countries where the tradition of knighting is still kept up in modern times have also generally streamlined the ceremony somewhat.

Knighting is probably most well known in the public mind as the moment when a figure such as the true king, The High Queen or another knight taps the squire on the shoulders with the flat side of the blessed sword. Originally, any knight could make another. This power was slowly moved into the hands of great nobles, and then finally reserved to the Monarch alone. The more formal a court, the fewer people will have the authority. Some women in history were granted knighthood, despite the male-dominated nature of the order. For a long time, however, women were not allowed to perform the knighting ceremony; this only changed when the authority to create knights was restricted to the monarch, which meant that a queen had to be able to do it if she was the sovereign.

The final act in the dubbing usually involves the new knight swearing their loyalty to The Good Kingdom. Oftentimes, when someone is knighted, the superior giving the knighting punches them or strikes some other kind of blow, the last such blow that the new knight is expected to take without some form of retribution. A variant of this may happen during the dubbing, when the person is hit with the flat of the sword almost hard enough to be winded or knocked over. At certain times in history the pivotal moment was when the officiants girded the sword around the initiate's waist and fastened golden spurs to his ankles. Again, you may not see all of these details or variations in a given show. The ceremony is often followed by The Tourney to celebrate the occasion and give the newly created knight a chance to demonstrate their prowess.

The ceremony is likely to appear even in works set in The Low Middle Ages, and the degree of elaboration tends to have only tenuous relationship to the alleged era of a work.

Subtrope of Initiation Ceremony. Related to Awesome Moment of Crowning and Standard Hero Reward. It's tenuously related to white knighting, where a person acts to achieve the glory of being seen as a knight-like figure, not because of any personal chivalry, but because of the personal benefits it will bring.

Lightsabers make this ceremony all the more awesome.

Lightsabers make this ceremony all the more awesome.