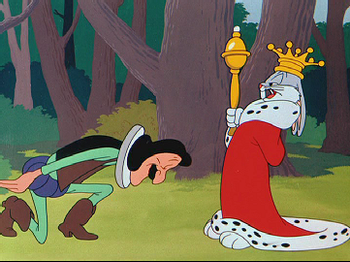 "Rabbit Hood" is a 1949 Merrie Melodies short directed by Chuck Jones that makes fun of the Robin Hood legend. Bugs Bunny attempts to steal carrots from the king's garden, but the Sheriff of Nottingham keeps trying to foil him. Bugs, annoyed, spends the entire picture trying to get even.

Not to be confused with "Robin Hood Daffy", also by Chuck Jones.