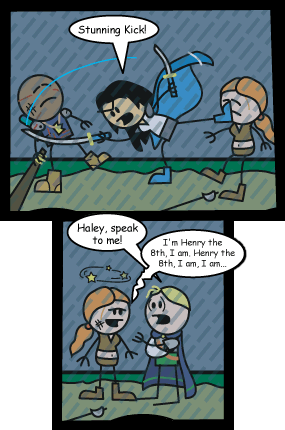 I mean, she's speaking to you, isn't she?
"Thank you, Andre. I'll have the veal piccata."
— Jim "Washout" Pfaffenbach (after slamming face-first into an ambulance), Hot Shots!
Advertisement:

A character has suffered an amusing injury, usually of the blunt force to the head variety. Dazed, he will say something really random and Non Sequitur, normally either before going out like a light or after being awakened. It seems that with proper application of blunt trauma, the human skull becomes a radio receiver tuned to a random station somewhere in the world. Three common phrases used are "How many fingers am I holding up?" (helpful bystander), some variation of "I don't wanna go to school today, mommy" and "Anybody get the number of that truck?" (victim). The character may also mistake someone closest for someone else during such.

A subtrope of Non Sequitur and Parting-from-Consciousness Words, which also includes the cases where the parting words actually make sense. Overlaps with Intoxication Ensues when caused by drugs or alcohol. May result in Delirious Misidentification. See also Concussions Get You High. In less serious works, tends to come hand-in-hand with Circling Birdies.

open/close all folders
Advertis... BONK! No thank you, Jeremy. I've had enough cake.

The player then goes on to act like Batman for the rest of the commercial as the sales pitch is going on.

Anime & BONK! Okay, Mr. Fancypants! Let's rumple!
Advertisement:
Comed... BONK! What a delicious mailbox!
Comic Boo... BONK! Yellow o'clock already?
Comic Stri... BONK! The table is saying naughty words again.
Fan BONK! Fuck you, Roosevelt! I'mma going to space!
Films — Animati... BONK Happy fishies everywhere!
Films — Live- BONK I'll mow your children for only two milks.
Litera... BONK My sewing circle married a motorcycle! Care to join us?
Live-Action T... BONK Dave is EVERYWHERE!
Musi... BONK Hey kids! Let's take a mustard bath!
Pro Wrestl... BONK I'm pregnant with your cat. See you next Blednesday!
Role... BONK My appendix is in drag. You want anything while I'm out?
Sport... BONK Woodworking is the finest of doctors.
Video... BONK No, Benny! I won't join your garden!
Web Animati... BONK The rent is fine, but it won't stop dancing.
Web Comi... BONK I can give you all the hummus you want.
Web Origin... BONK Muffins for currency? Brilliant concept!
Web Vide... BONK When I grow up, I wanna be purple!
Western Animati... BONK This humble little break and bedfast is run by running.
Real... BONK Saturn is a god planet car!
Thank you, you've been a lovely audience. I'll be out back eating the chain link fence—*THUMP*
Feedback