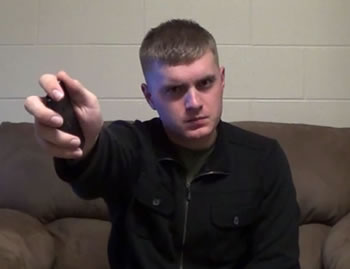 It's the Rule of Cautious Editing Judgment. It wants to talk to you.
"Most people say time is like a river flowing swift and sure in one direction. I have seen the face of time, and I can tell you: they're wrong. Time is an ocean in a storm. You may wonder who I am and why I say these things. Come, and I will show you a review like none you have ever heard. Know first that I am the Fiery Joker, a mighty YouTube gamer. On my way through life, I was forced to watch My Little Pony and review it by a small company of men... painfully. The promise of AdSense and subs tempted me into a grievous error..."
— Josh Scorcher
Advertisement:

(a.k.a. Josh Scorcher, The Fiery Joker, and Commander Firebrand) is a YouTube producer and former United States Marine (he finished service in December 2014) specializing in video-game-related Top Ten Countdowns and video reviews of My Little Pony: Friendship Is Magic. He also ran the Brony Website FOB Equestria (the link to the website is currently offline), which bills itself as a Military-centric version of Equestria Daily.

. He does the occasional Let's Play, but isn't so good at finishing them. However, after making his Top 10 Worst Kingdom Hearts Bosses, he started an LP of Kingdom Hearts II Final Mix, which he actually did finish. He also has several other channels, including Joshua Burner for his reaction videos, Dragonfinder Gaming

for his adventures in tabletop gaming, and Fall of Equestria

for cartoons, specifically for My Little Pony: Friendship Is Magic.

Even though he says otherwise, Josh falls for the Looney Tunes gag.

Even though he says otherwise, Josh falls for the Looney Tunes gag.