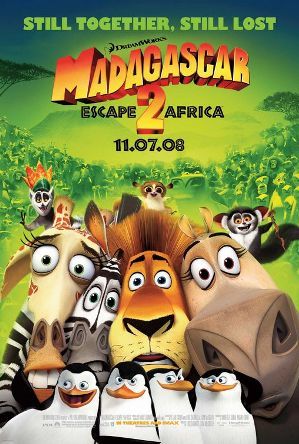 Still together. Still lost!
Madagascar: Escape 2 Africa is a 2008 computer-animated comedy produced by DreamWorks Animation, and is the first sequel to 2005's Madagascar.
Advertisement:

The film takes place shortly after the first movie. The penguins fix a crashed airplane and the zoo animals (plus King Julien and Maurice) try to fly back to New York but run out of fuel (or perhaps more accurately, run out of plane) and crash. They land in a wildlife reserve and discover not only that there are others like them, but also that the lion pride in charge is Alex's family.

This film is followed by a third film titled Madagascar 3: Europe's Most Wanted, which came out on June 8, 2012.

Introduction showing how Alex ended up in New York City as a cub.

Example of:
A Minor Kidroduction

Introduction showing how Alex ended up in New York City as a cub.