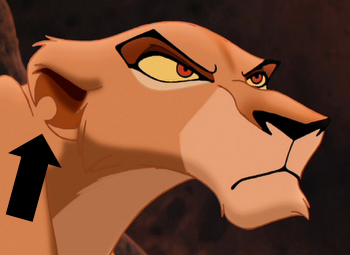 An ear piercing Gone Horribly Wrong?
Girl: All cats look like that. Quite a lot do anyway.
Sister: Not as large as that, and not with such a big, fluffy tail, and not with that frightening angry expression on their faces, and not with half an ear missing.
— Stray
Advertisement:

Say that your anthropomorphic character is from the wrong side of the tracks — a true scrapper from the bad side of town. How do you show this easily? Add some notches to their ears for that tried and tested "been through it all" indicator. The ol' 'circular chunk out of the ear' character design trick has been around for some time and most commonly appears on animated animals. It acts as a simple indicator of a character's alignment or temperament if within a group, usually denoting tough or evil traits or simply to denote badassery.

On the Sliding Scale of Anthropomorphism this can apply to almost all points from Nearly Normal Animal to Funny Animal (though they can also appear on Beast Man) as long as the ears are still large enough and/or discernible as non-human. Even humanoid species with large or long ears like elves can have ear notching too, just don't expect it on a human as it'll be almost entirely invisible.

Sometimes can be used for added character in a Cute Little Fangs sense where the character isn't at all gritty and/or bad. Tangentially related to Good Scars, Evil Scars.