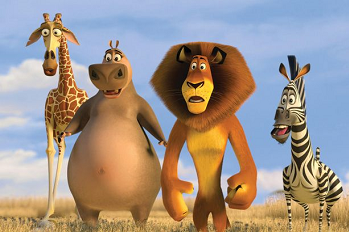 "It walks... like a man!"
— Shaw, Open Season
Advertisement:

This trope is about the fact that some of the animals on the same end of the Sliding Scale of Anthropomorphism are more likely to be bipedal and others are more likely to stay on all fours. In other words, you have a group of Nearly Normal Animals, Talking Animals, Partially Civilized Animals and Civilized Animals where one character stands on two legs while another stands on four.

The two-legged characters might be more intelligent or more "humanized" than the others - not only does it require much more brain power to balance and coordinate standing on two legs, but it also frees up the front limbs for grasping or tool use - but it's not always the case; usually, the reason for whether a character stands on two legs or four is because some animals would look really weird standing on two legs.

Funny Animal examples are allowed, but no animal that is naturally bipedal, like birds.

Sometimes, however, a single character, most often a Civilized Animal or a Funny Animal, can shift between using two legs and four.