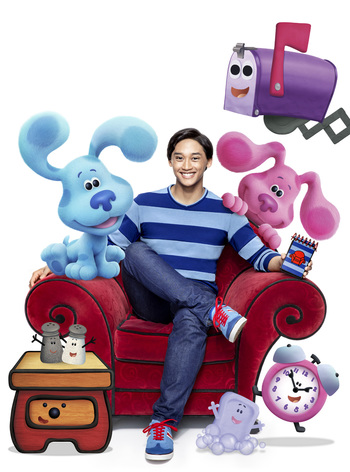 Josh with Blue, Magenta, Salt, Pepper, Slippery Soap, Tickety Tock, Sidetable Drawer and Mailbox.
Everybody's lookin' for Blue's Clues
Come on in, come on in, it's Blue's Clues!
Step-by-step, yes!
Clue by clue, let's
Think it through, it's
What we do, so let's get to it!
It's Blue's Clues & You!
Advertisement:

Blue's Clues & You! is a 2019 reboot of the series Blue's Clues. The show has a new host named Josh, who is the cousin of Steve and Joe, played by Joshua Dela Cruz, known for playing Aladdin and Iago in the Broadway adaptation of Disney's Aladdin, and now has the main characters done in CGI animation.

The show premiered on November 11, 2019, on Nickelodeon, but the first three episodes were released early to Vudu on September 27 for free. The third episode was also released online to YouTube and the Nick Jr. app and website on October 28, 2019, with the second episode being released on March 28, 2020.

The show was renewed for a second season

In commemoration of the 25th Anniversary of Blue's Clues, the show will receive a film, Blue's Big City Adventure, which will have Josh and Blue audition for a big Broadway musical in New York. It is set to be released on November 18, 2022, on Paramount+.

associated with the series - Story Time with Josh & Blue - was also introduced on July 8, 2020, with the first actual installments released on August 4, 2020. These feature bedtime stories ranging from about 5-9 minutes in length.

Blue's Clues & You! contains examples of:

Now it's time for so long!
But we're gonna sing one more song!
Thanks for doing your part!
You sure are smart!
You sure worked hard!
When you use your mind,
Take a step at a time,
You can do anything
That you wanna do!