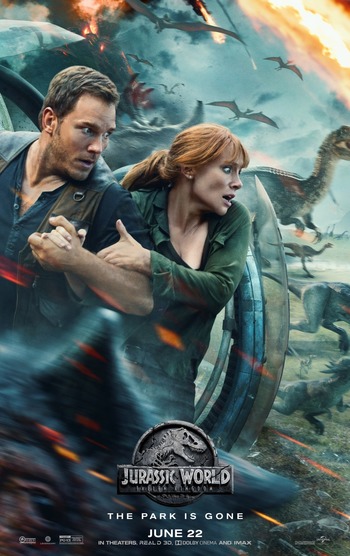 "Change is like death; you can't see what's on the other side until you are at the gates."
"Rescue op. Save the dinosaurs from an island that's about to explode. What could go wrong?"
— Owen Grady
Advertisement:

Jurassic World: Fallen Kingdom is the 2018 sequel to Jurassic World, and the fifth film in the Jurassic Park franchise. Juan Antonio Bayona takes over the director's chair from Colin Trevorrow, who remains on as executive producer alongside Steven Spielberg. Trevorrow is credited as co-writer with Derek Connolly. It was released in the USA on June 22, 2018.

Chris Pratt, Bryce Dallas Howard and B.D. Wong reprise their roles as Owen Grady, Claire Dearing, and Dr. Henry Wu. They are joined not only by newcomers played by James Cromwell, Toby Jones, Geraldine Chaplin, and Justice Smith, but also notably by Jeff Goldblum, who reprises his role of Dr. Ian Malcolm from Jurassic Park and The Lost World.

Four years have passed since the fall of Jurassic World. Isla Nublar has once again been abandoned, the park left in ruins and the dinosaurs to their devices. Now, the island that was once home to the original Jurassic Park and its successor is ready to go up in a massive eruption of lava due to a volcano that awakened on the island. Because of this, one of John Hammond's old partners offers to help rescue the dinosaurs. Claire Dearing recruits Owen Grady to join in on the rescue mission due to the fact that his old companion, the Velociraptor Blue, is still alive on the island. Now, it's a race against time and the vicious creatures still on the island to rescue as many as possible to release into a sanctuary, before Isla Nublar finally goes up in a catastrophic inferno...

Or at least, that's the story they are told...

In February 2018, a third Jurassic World film, later titled Jurassic World: Dominion, was announced with a tentative release in June 2021 (later delayed to June 2022 after the COVID-19 Pandemic temporarily halted production). An augmented reality game, Jurassic World Alive has been released on 24 May 2018. A teaser short film, Jurassic World: Battle at Big Rock, was uploaded in September 2019.

In June 2018, a prequel novel The Evolution Of Claire written by Tessa Sharpe was released that is set between the events of Jurassic Park III and Jurassic World that centers on the character of Claire Dearing and her first year of internship with Masrani Global one year prior to the opening of Jurassic World.

It's the first Universal picture, involving dinosaurs, to be filmed in a widescreen CinemaScope aspect ratio since Dinosaurus!, released nearly 50 years prior.