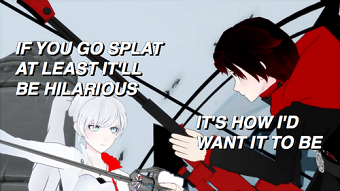 RWBY Recaps is a Tumblr blog written by Matt the Mammoth Rider.

As its name suggests, the purpose of the blog is to recap the events of Rooster Teeth's web show, RWBY. However, it also functions as something akin to a text-based Abridged Series. The posts are filled with captioned screenshots used to tell jokes about the episodes' situations or outright rewrite them, Matt gives many characters a tongue-in-cheek Alternative Character Interpretation, and there are tons of comedic references or comparisons to other works. All the while, Matt will still cover the events that actually happened within episodes and bring up his own (serious) thoughts and theories as to what's going on.

The parody has covered:

The blog went on indefinite hiatus — with the distinct possibility of permanent cessation — in February 2017, leaving Volume 4 unfinished.

Warning, unmarked spoilers for all Volumes below. We assume you've come here after having watched both the episodes and read Matt's recaps, which are usually one episode behind the actual Rooster Teeth schedule.