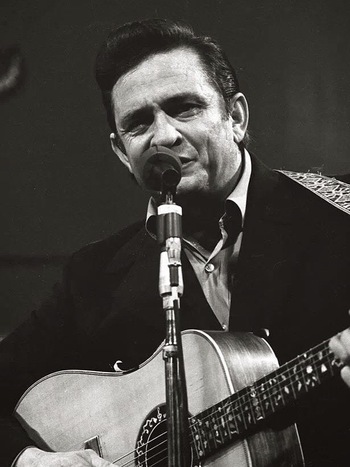 John R. "Johnny" Cash (born J. R. Cash;note Many sources erroneously attribute the middle name "Robert", however officially the "R" did not stand for any name. Cash's official birth name was in fact J.R. because his parents couldn't agree on a name, but he was made to adopt John in 1950 when he joined the Air Force. February 26, 1932 – September 12, 2003) was an American singer-songwriter and musician who was associated primarily with Country Music but worked in a variety of genres including rockabilly, blues, folk, and gospel. Easily one of the most influential musicians of the 20th century, Cash was known for his deep baritone and distinctive black wardrobe, and for starting nearly all his concerts by saying "Hello, I'm Johnny Cash." He's also well-known for his relationship with fellow musician June Carter, whom he eventually married.

Born and raised in Arkansas, Cash did a stint in the U.S. Air Force before embarking on his music career, moving to Memphis, Tennessee and signing his first record contract with Sun Records' Sam Phillips in 1954. He found his first success with the hit singles "Folsom Prison Blues" (1955) and "I Walk the Line" (1956). In 1958 he moved to Columbia Records, and in the early '60s he toured with June Carter and her family before releasing "Ring of Fire" (1963), his first crossover pop hit. "Ring of Fire" was co-written by June and was allegedly a reference to the fact the two had fallen in love by this time, despite both being married to other people.

During this time, Cash struggled with substance abuse problems and eventually went public with his drug problems. He also dealt with the collapse of his first marriage and eventually tried to commit suicide while under the influence. He failed, and instead experienced an epiphany which led him to reconsider his choices. In 1968 he quit using drugs, though he would relapse on several occasions (most notably in the early 1980s when he suffered severe internal injuries after being attacked by, of all things, an ostrich). He also began performing concerts at prisons, and even recorded there. The most famous of these prison albums was At Folsom Prison. Not long after recording the Folsom album, Cash and Carter finally married.

A subsequent prison concert album, At San Quentin, would feature a comedy song called "A Boy Named Sue"note Written by no less than Shel Silverstein which would become Cash's biggest hit. From 1969–71 he hosted his own self-named variety series on ABC, The Johnny Cash Show, and continued to record prolifically through the 1970s, although the hits came less frequently. In 1986, he was dropped by his longstanding label Columbia Records and began an unsuccessful stint at Mercury Records. During this period his major success came as a member of the country supergroup The Highwaymen.

In 1988 Cash met Frank Zappa backstage and they were set to perform together on stage, but when Cash's wife got sick he couldn't be present, so Zappa covered "Ring Of Fire" alone with his band. Their live rendition can be heard on Zappa's The Best Band You Never Heard in Your Life (1991).

Starting in The '90s, Cash underwent a Career Resurrection, beginning with a well-received collaboration with U2 on their song "The Wanderer". In 1993, Cash, Charlie Daniels, Mark O'Connor, Travis Tritt, and Marty Stuart collaborated on "The Devil Comes Back to Georgia", a sequel to Daniels's 1979 hit "The Devil Went Down to Georgia". Then, under the guidance of Record Producer Rick Rubin and his label American Recordings, Cash recorded a series of albums nicknamed "the American series", starting with 1994's American Recordings. Marked by minimalist production (Recordings was recorded solely with a guitar and vocals) and covers of various bands, such as Tom Waits' "Down There by the Train", Soundgarden's "Rusty Cage", U2's "One", Nick Cave's "The Mercy Seat", Nine Inch Nails' "Hurt" and even Depeche Mode's "Personal Jesus", these albums earned him critical acclaim and a new, younger audience of Alternative Rock fans. The Music Video for "Hurt" was widely acclaimed.

Cash dabbled in acting from time to time, appearing in obscure films such as a film noir called Five Minutes to Live, a western opposite Kirk Douglas called A Gunfight, and also numerous TV movies and guest appearances on shows like Dr. Quinn, Medicine Woman. He also voiced the coyote in The Simpsons episode El Viaje Misterioso De Nuestro Jomer. He later said his proudest achievement was a religious film he wrote and produced in the early 1970s called Gospel Road.

He died in 2003 at the age of 71 (due to a myriad of health problems that set in during the late 1990s, he looked much older), only a few months after his beloved wife, June Carter Cash, died and only two weeks after recording his final songs. By that time, he'd earned a reputation not only as a Cool Old Guy, but as one of the greatest legends in music history. He is one of only 11 artists to be in both the Rock N' Roll Hall of Fame and the Country Music Hall of Fame.

His life was eventually adapted into the biopic Walk the Line starring Joaquin Phoenix and Reese Witherspoon.

Johnny Cash is the Trope Namer for:

"Hello, I'm Johnny Cash and these are my tropes":