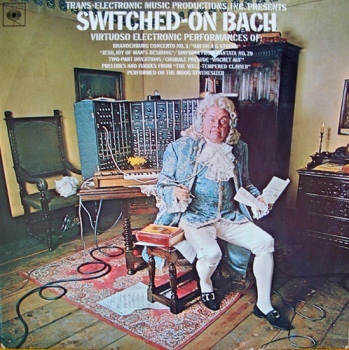 The first album cover, which was pulled because it was deemed too clownesque. 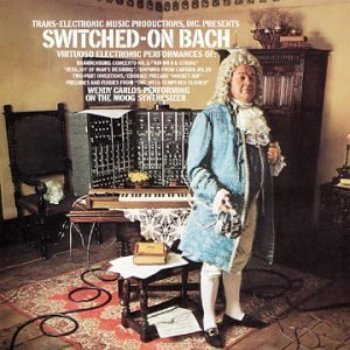 The second, more common, album cover shows Bach in a more dignified way than the first one.
Switched-On Bach is the 1968 debut album by Wendy Carlos note  at the time credited as Walter Carlos, before her 1972 transition/gender reassignment to a woman . This Cover Album performs the music of Johann Sebastian Bach on a Moog synthesizer, which at the time was a new and controversial move. Bach was held in high esteem among music fans and the very idea that someone who dared to tamper with his work by giving it a modernized sound was considered blasphemous by some. Others believed that Bach would have approached a synthesizer as just another type of organ. Indeed, in his own day, Bach was closely involved with instrument makers, and followed technical innovations; The Well-Tempered Klavier was written to show off new techniques in piano building and tuning that would allow an instrument to be played in tune in any key.
Advertisement:

Still, the album was a colossal bestseller in a way that Classical Music had never experienced in decades. Many youngsters who felt that Classical Music Is Boring did enjoy listening to it in this format. Furthermore, the album proved that Electronic Music could be profitable and merited according to its own terms. Carlos herself followed it up with similar albums in this vein, and countless other electronic composers have tried to imitate her by also making synthesizer renditions of other classical works. Even renowned classical performers E. Power Biggs, Zoltán Rozsnyai, Pablo Casals and Glenn Gould, who liked the work, released a classical music album called "Switched Off Bach" (1972).

Switched-On Bach won three Grammy Awards, including "Best Classical Album", and it was inducted into the National Recording Registry in 2005 for being "historically, culturally and aesthetically important". It was one of the first uses of an electronic instrument in a way that could be taken seriously by musical purists i.e. not used as for sound effects in sci-fi movies, thus demonstrating what a synthesizer could really do. To some listeners, the clean and precise tones produced by the analog circuits gave increased clarity to Bach's original writing, even if producing the recordings was incredibly difficult.note  The early Moog could only generate one note at a time, meaning that to play a chord, each note in the chord had to be recorded separately, then the multiple tracks overlaid into the final piece, with extreme care to make sure that all parts were played at the exact same tempo and synchronized correctly.