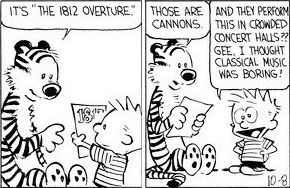 Classical Music has a reputation for being endless, boring, and stuffy. The Classical Music Is Cool trope challenges this by often having a character who initially dislikes classical music become excitedly rapturous after actually listening to a symphony or opera (thus also overlapping with I Do Not Like Green Eggs and Ham).
Advertisement:

Other times, this trope can be used in works where there are clashing "cultured" and "uncultured" groups who favor classical and popular (usually rock) music respectively. After both groups take the time to listen to the music they say they hate, both groups eventually agree that there's merit in both popular and classical music thereby leading to an Aesop about why it's good to keep an open mind on cultural matters.

This trope also can be invoked to show hidden depths and/or sensitivity in a lower-class/ middle-class male who seems loutish upon first glance. Or maybe he's motivated to appreciate music because he's developed an interest in an Elegant Classical Musician.

Further see Orchestral Bombing and Rock Me, Amadeus!. The polar opposite of Classical Music Is Boring. Also compare and contrast At the Opera Tonight, when what's cool is not so much the music itself but that it gives people a chance to hang out at a high society event.