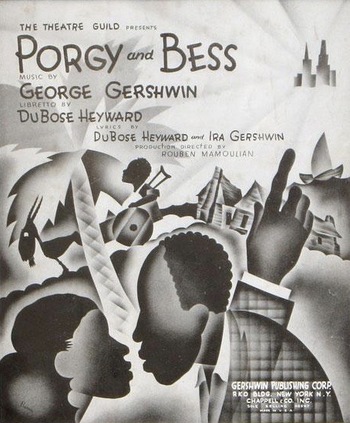 Summertime, and the livin' is easy,
Fish are jumpin', and the cotton is high.
Oh your daddy's rich, and your ma is good lookin',
So hush, little baby, don't you cry.
—"Summertime"
Advertisement:

Porgy and Bess is George Gershwin's famous opera, based on DuBose and Dorothy Hayward's novel and play Porgy, with lyrics by DuBose Hayward and Ira Gershwin.

Conceived as an American Folk Opera, Porgy and Bess is Gershwin's take on the life of African-American fishermen scraping out an existence on Catfish Row, a fictitious locale based on Cabbage Row in Charleston, South Carolina.

Bess is addicted to "Happy dust" (cocaine) and strung along by her dealer/boyfriend Crown. After Crown kills another man over a craps game, he escapes to a nearby island, leaving Bess. Porgy, a peddler well-liked in the community, takes her in. The story unfolds with Porgy and Bess' blossoming relationship and what happens to them in Catfish Row.

Opened to great controversy in 1935, but the music and themes are classic, and is now regarded as one of the great American opera; no other American opera comes anywhere near the popularity and critical acclaim (both domestic and abroad). Part of the acclaim is that it is the show that integrated theater audiences thanks to its original cast. The leads would not go on if the audience in Washington D.C. was not fully integrated.

From The Other Wiki:" "Summertime" is by far the best-known piece from the work, and countless interpretations of this and other individual numbers have also been recorded and performed. The second best-known number is "It Ain't Necessarily So". The opera is admired for Gershwin's innovative synthesis of European orchestral techniques with American jazz and folk music idioms."

Adapted into a 1959 film directed by Otto Preminger and starring Sidney Poitier as Porgy, Dorothy Dandridge as Bess, and Sammy Davis Jr. as Sportin' Life. Poorly received by critics and commercially unsuccessful, the film was so disliked by the Gershwin estate that for decades after its initial run they made a point of destroying any prints they could find; it only aired on network TV once and has never gotten a home video release.

Porgy and Bess provides examples of: