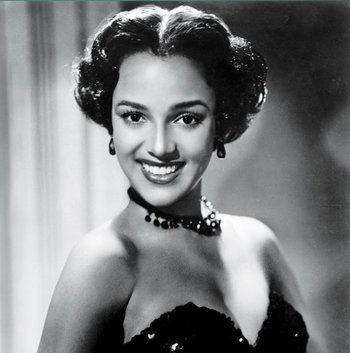 Dorothy Jean Dandridge (November 9, 1922 — September 8, 1965) was an American actress, singer, and dancer. She appeared in movies and performed on stage and is notable for being the first black actress to be nominated for a Best Actress Academy Award. She was also a frequent performer in Apollo Theater and Cotton Club and was in a group called The Wonder Children, which later changed its name to The Dandridge Sisters (even though only two were related — Dorothy and her sister Vivian note best remembered for doing voice work for So White in the Censored Eleven's Coal Black and de Sebben Dwarfs — whereas the other was a family friend).

Dandridge is best remembered as her Oscar-nominated performance in Carmen Jones but she made uncredited appearances in other movie musicals. She also did non-musical films, frequently acting alongside Harry Belafonte. She was nominated for a Golden Globe for Porgy and Bess and in between filming, she continued to either record music or perform on stage, as well as becoming involved with the Civil Rights Movement. However, on the night she was due to perform, a 42-year-old Dandridge was found dead in her dressing room. To this day, her cause of death is debated, from theories ranging from a drug overdose (either accidental or suicide) to a stroke or blood clot. This is probably why she's been the subject of several biopics and documentaries and she is often referenced in media because of her legacy for black actresses in Hollywood (Halle Berry, who portrayed her in the biopic Introducing Dorothy Dandridge, dedicated her Oscar to Dandridge, as well as Lena Horne and Diahann Carroll). She also has a statue, along with Dolores del Río, Anna May Wong, and Mae West, to show Hollywood's history of diversity.