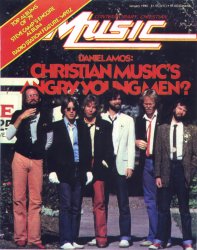 Note: may be less angry than advertised.
"Get it straight: Terry Taylor is a legend. ... Over the course of 20 years and as many records, Taylor has, with inimitable wit and lyrical prowess, exposed the collective neuroses and hypocrisies of the American Church. As a member of such bands as Daniel Amos, The Swirling Eddies and The Lost Dogs, he and his compatriots rewrote the Christian rock paradigm, giving a voice to frustrated young Christians."
— "Terry Taylor Rides a New Wave", 7-Ball Magazine, July/August 1998
Advertisement:

Daniel Amos was a genre-pushing rock, New Wave, and alternative band fronted by Terry Scott Taylor (yes, that Terry Scott Taylor), notable for their huge influence on Christian Rock's underground scene, and later influence on some not-so-underground Christian rock acts of the '90s and later. Even outside that scene, they are critically acclaimed by secular music critics, the members of U2 were fans, and Collective Soul have cited them as an influence.

DA started off in 1974 as a folk group, and signed to Maranatha! Music (yes, that Maranatha) in '75. Needing to come up with enough material for a debut album, they settled on a style that was easy to write and would give them a wide appeal: country-rock. Almost immediately, their ambitions pushed them to the boundaries of the genre, and they soon abandoned the country sound altogether. Unfortunately, while advertising hyped how "bizarre" and "multifaceted" their upcoming Horrendous Disc was, the album itself languished in pre-release limbo for three years, due to some equally-bizarre behind-the-scenes record label shenanigans that, to this day, no one really understands. During this period, DA managed to accidentally run afoul of the über-conservative Christian scene of the '70s several times; this, and their focus on new material over the old country songs at live shows, alienated most of their fans and forced DA to rebuild their fanbase almost from scratch.

Some of their fellow Christians had criticized DA for not gearing their music specifically for the Church body; DA responded with The Alarma Chronicles, a series of four concept albums intended as a wakeup call for Western Christians. The music was cutting-edge New Wave, and the lyrics satirized hypocrisy, dodgy theology, televangelists, and the shallow nature of modern society, tempered with heartfelt meditations on God, doubt, and the band's own failings. This was followed up by Darn Floor-Big Bite, which—though a critical success and considered by many fans DA's best album ever—was a commercial flop.

DA could have quit right there and their place in Christian rock's history would have been assured, but they didn't. In the wake of Darn Floor-Big Bite, DA decided to try something different; the result was several of the members taking on pseudonyms and recording as The Swirling Eddies, whose music was even more silly and satirical than DA's usual fare.

The 90's saw DA reunite and resume recording new material. In the 2000's, their productivity slowed down quite a bit, but Terry Scott Taylor is still writing music and none of his bands have officially called it quits. Daniel Amos' most recent album is 2013's Dig Here Said the Angel, funded through Kickstarter and showcasing the band's interest in modern indie rock and Post-Rock.