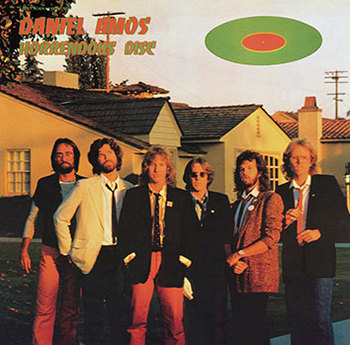 Horrendous Disc is Daniel Amos’ third studio album, recorded in late 1977 and early 1978. It wound up being a surprising lightning rod for controversy and record label shenanigans.

On their first two albums, DA had played Eagles-esque country/soft-rock, earning themselves a significant fanbase among the Jesus Music scene. Those prior albums also had some stylistic experiments that hinted at what was to come, if any fans had been paying attention. Because, for album number three, DA decided to abandon country altogether and record a bunch of rock songs. They drew influence primarily from The Beatles and The Beach Boys, and also made forays into Hard Rock, funk, and pop-prog in the vein of Electric Light Orchestra. Though musically tame by modern standards, it was a risky style for DA to play in the late ’70s, when much of their (white conservative Christian) audience still didn't quite trust any music that rocked too much.

Mismanagement by their label—Larry Norman’s Solid Rock Records—certainly didn’t help things. In spite of being completely finished in 1978, Horrendous Disc wasn’t released for three years. The album still got promotion via Christian radio and print ads (one ad stirred up controversy for looking like a horror movie poster), and DA still focused on their new material at live shows (much to the irritation of old fans who wanted to hear them play country)—but for fans who couldn’t actually buy the album, the hype was just confusing and annoying. DA got so frustrated with the delay that they eventually gave up on the album, switched to a new record label, and started working on a followup album.

So when Horrendous Disc finally hit the shelves in 1981, it was largely overshadowed by DA’s next album, ¡Alarma!—which was released mere weeks later and featured an even more radical departure from the old style. Nevertheless, to those in the alternative Christian rock scene, Horrendous Disc has been Vindicated by History. It’s highly regarded by those DA fans who didn’t jump ship when the band stopped playing country, and AllMusic gave it a five-star rating

Other versions
Canadian version: Same as the US version, but omits “Never Leave You.”

2000 CD reissue: Uses the US tracklist, with the following bonus tracks:

2007 CD-R reissue: Uses the US tracklist, with the following bonus tracks: