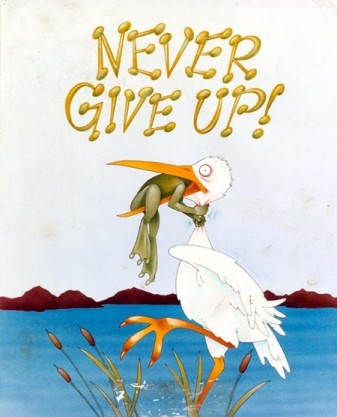 I can do this all day.
Broly: Why don't you just give up?
Goku: [laughing weakly] I... never really learned how to...
— Dragon Ball Z: Broly – The Legendary Super Saiyan
Advertisement:

A character — good or evil, male or female, young or old — who never gives up. Ever. No matter what.

There is no stopping the Determinator. They do not understand tact. They do not Know When to Fold 'Em, and it's a waste of time to tell them the odds. No one can reason with them. They'll do whatever they have to without question. No price is too great to pay for success, up to and including their own life. Do not expect them to realize they might be better off letting it go, even if they can barely stand. If you're ever kidnapped or lost with no hope of rescue, they'll be the one who will find you. Their adversaries will shout, in exasperated rage, "Why Won't You Die?!". For them, there is no line between "perseverance" and "insanity."

The nobility of their goal is not necessarily proportionate to their persistence. This is just as often an obsessive rival with a grudge as it is a hero on a chivalrous quest, and where their willpower ultimately leads them will depend both on their role and on where the work stands on the Sliding Scale of Idealism Versus Cynicism. Heroes — especially Badass Normals with a Screw Destiny attitude — will defeat villains by virtue of being too stubborn to stay down. Anti Heroes will Jump Off The Slippery Slope, forsake The Powers of Love and Friendship, become like that which they fight, and walk the thin line between victory and tragedy. Villains will refuse to admit defeat, resist seemingly fatal punishment, hunt their prey tirelessly and relentlessly, and let the heroes know that We Will Meet Again. And mailmen will always get your mail to you. More inhuman beings such as monsters or an Eldritch Abomination may just also be The Juggernaut, and this will present a serious problem for the heroes who may have to find some MacGuffin just to survive as it endlessly plows through everything and refuses to take a break.

Shōnen anime and manga love this trope, such that it is quite rare to find a protagonist of these works who isn't a Determinator and is guaranteed where super-heated blood is involved.

Compare and contrast with Implacable Man (or woman)— while a Determinator pursues their goal through sheer willpower, the Implacable Man is driven by artificial, unnatural, or magical means, and often suffers no apparent damage at all.

Compare Suicidal Overconfidence, a common feature of many Video Game genres where enemies will always, blindly, and relentlessly be at your throat with no regard for how horribly you are massacring them (though this is more due to genre requirements than characterization). Compare Tragic Dream, where becoming a Determinator can only end in tears. Can be identified by their trademark Determined Expression.