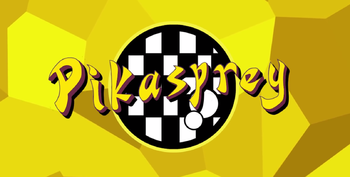 Pikasprey note prounouced "Pik-aspree", not "Pika-spray", also known by his real name of Christian, is a YouTuber who makes videos about various video games, often for the purpose of reviewing, analysing, or playing them.

He has two separate YouTube channels and a Twitch channel

The games he features fit into a wide range, being anything from Pokémon and Sonic the Hedgehog, to more obscure games like Confess My Love, to fan games, ROM hacks, and parodies; The basic criteria is, if it'll be weird or challenging, he'll play it. This sometimes include setting his own challenges to push the limits of the game, exploiting glitches, or playing whatever his audience requests.

He also made Turtle Head, and supported the creation of its Fan Remake, Unmasked.

Please note though, some of the games played on "Blue" are NSFW; Only the basics about those games will be discussed when necessary.