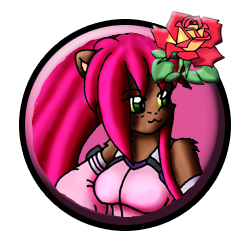 Pink Kitty Rose, Cat Gamer!
Pink Kitty Rose (real name: Sammy) is a person who does playthroughs of video games on YouTube. An avid fan of platformers, mostly Mega Man, she engages in Let's Plays on her account.
Advertisement:

What makes Pink unique from the Eleventy Zillion other Let's Play accounts is two things. First, most of her videos include captions or annotations explaining what to do in that game instead of relying on verbal commentarynote unless she's doing livestreams. Second, she's one of the few successful enough to warrant a website to showcase her works, though it has closed down as of fall 2018.

She now has a fangame. See here for more.

Games she has done a playthrough of:

Tropes applying to her or her playthroughs: