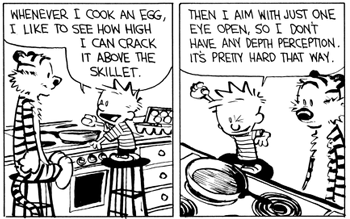 "No one, I mean no one, could get laid wearing these. Challenge accepted!"
— Barney Stinson, How I Met Your Mother
Advertisement:

Imagine you're a hardcore gamer. Like most gamers, you probably don't have unlimited funds, so every time you buy a new game, you want to get some real value out of your investment. In the old days, games were naturally Nintendo Hard and took a while to beat — but nowadays, you can beat most games in the space of a weekend. If you're a casual gamer, that's fine — but you're not a casual gamer. So how do you get a deeper commitment to your games?

A Self-Imposed Challenge is a playthrough of a game wherein the player plays under a restriction not required by the game itself in an attempt to increase the difficulty, immersion level, and replay value. These restrictions can range from the fairly simple (a refusal to make use of a Game-Breaker, for example) to the near-impossible ("Hey, can you beat Super Mario Bros. without pressing the "B" button

?"). Check a message board for a game that's been out for a while, and you'll undoubtedly find players reporting on their progress in various exotic Self-Imposed Challenges.

Gamers will occasionally record these runs and post them on various archive sites. As noted above, the prevalence of casual gamers in the community make these even more of a dedicated pastime than ever before.

Note that in order to qualify as a Self-Imposed Challenge, the challenge has to be truly self-imposed: if the game acknowledges the challenge in any way, such as offering an option to play with such rules or rewarding players who fulfill these conditions, it instead falls under the Challenge Run trope. That said, sometimes a video game franchise will make official in later games a self-imposed challenge among fans of earlier games.

Some of these can overlap.

Examples With Their Own Subpages: