Video Game / This War of Mine 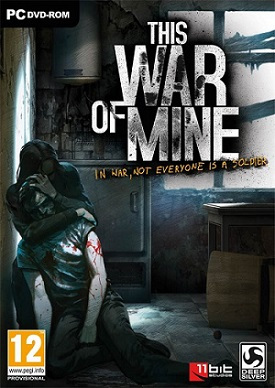 In war, not everyone is a soldier.
Advertisement:

This War of Mine is a survival sim from Polish developer 11 Bit Studios. Civil war has broken out in an eastern European nation called "Graznavia" between the Grazni-dominated government and a separatist movement led by the country's Vyseni ethnic minority, leading to a siege of the capital city "Pogoren". Amidst shelling and snipers, the civilians of the city are caught up in the damage wrought by the fighting. Unable to flee due to the siege, as potential targets for trigger-happy fighters on either side, they must scavenge for food and medicine to survive the twisted hell that the city has become.

The game is available on GOG.com and Steam.

As of April 28, 2015, the game was updated with a custom scenario editor and a custom survivor creator.

An expansion called This War of Mine: The Little Ones was released on PlayStation 4 and Xbox One on January 29th, 2016. It allows players to include children as part of the survivors, and revolves around the challenges and difficulties children and their carers face during wartime. It was later released on PC and Mac on June 1st 2016. On November 15th 2017, This War of Mine: Stories was released, featuring Father's Promise, the first of three planned DLCs with a heavier emphasis on storyline. A Complete Edition containing all the DLC was released for Nintendo Switch in November 2018.

In 2016, a boardgame version of the game was crowdfunded on Kickstarter by Awaken Realms. The game has been since delivered to backers and has gone to retail.

This War of Mine contains examples of these tropes:

This War of Mine: Stories contains examples of:

The boardgame contains examples of: