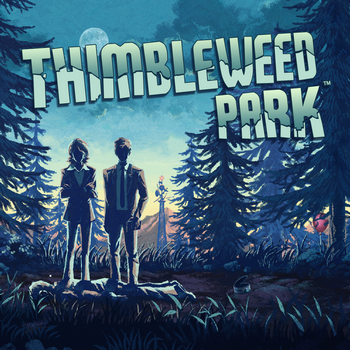 "In a town like Thimbleweed Park, a dead body is the least of your problems."
Advertisement:

Thimbleweed Park is a Point And Click Adventure Game from 2017 developed by Terrible Toybox, headed by Ron Gilbert and Gary Winnick. The game is explicitly built to the retro standards of the LucasArts adventure games of the 90s.

Agents Ray and Reyes have been called to investigate a corpse lying face down and beginning to pixelate by Trestle Trail, right off the highway near the tiny town of Thimbleweed Park. Delores Edmund wants to be a game developer, but if she becomes one, she'll go against her entire family's wishes. After an untimely death, a phantom needs to put his last affairs in order so that he might move on to the afterlife. Ransome the *bleep* Insult Clown, greatest artist of a generation, has pissed off the wrong person, and now needs to recover the mere tatters of his former success.

This is not what this game is about.

In 2020, Ron Gilbert released a free short game called Delores A Thimbleweed Park Mini Adventure that was made using assets from the main game.