Video Game / Day of the Tentacle 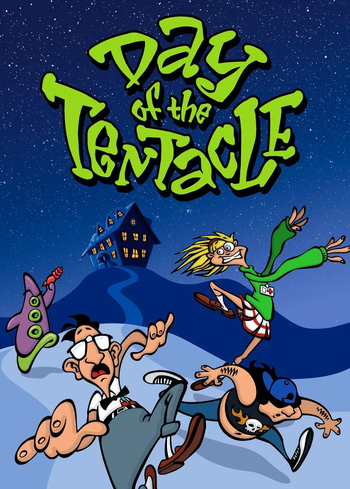 Our heroes, fleeing in terror at the first sign of danger.
Dr. Fred: Our only hope now is to turn off my Sludge-O-Matic machine and prevent the toxic mutagen from entering the river!
Bernard: Isn't it a little late for that, Doctor?
Dr. Fred: Of course! That's why I'll have to do it... yesterday! To the time machine!
Advertisement:

Day of the Tentacle, also known as Maniac Mansion II: Day of the Tentacle, is a LucasArts graphic Adventure Game from 1993 and sequel to Maniac Mansion by Tim Schafer and Dave Grossman, initially co-designed with Gary Winnick and Ron Gilbert, who came up with the time travel plot before he left the company, and inspired by the works of Chuck Jones.

Uber-nerd Bernard Bernoulli once risked his life to save the wacky Edison family from the control of an evil meteor. Five years later, he receives a desperate letter from the Edisons' friendly pet Green Tentacle begging him to return. It seems that Purple Tentacle, Green's evil brother, has imbibed some toxic waste carelessly dumped by Dr. Fred Edison and mutated into an insane genius. Dr. Fred has captured the two tentacles and is now going to put them both down. Bernard gathers his wacky roommates Laverne and Hoagie (a spaced-out, neurotic med student and a heavyset but easygoing roadie, respectively), and charges to the rescue. Unfortunately, when Bernard rescues Green from captivity he also releases Purple, who is now free to TAKE ON THE WORLD!!

Oh well, what possible harm could an insane evil mutant tentacle do?

As it turns out, quite a lot. Purple Tentacle uses his newfound intelligence to create a Bad Future where tentacles rule the world and humans are their slaves. Nice job freeing the megalomaniac, Bernard.

Doctor Fred uses his Chron-O-John to send the three back in time to Set Right What Once Went Wrong, but there is an accident (never cut costs by using imitation diamond in your time machine, kids!) which scatters our heroes across four centuries. Hoagie is stuck in colonial America during the creation of America as we know it, Laverne is trapped in Purple Tentacle's tentacle-run Bad Future, and Bernard must coordinate efforts in the present day to fix the broken time machine, bring his friends back, and save the world.

The voice acting, brilliant one-liners, clever puzzles, and memorable characters all conspired to make this one of the most popular of the LucasArts adventure games of all time, and probably better known than its predecessor.

open/close all folders
A-K
L-Z
Bernard: Well, what possible harm could one insane mutant tentacle do?
** Also when the three of them are floating through time:
Bernard: I'm sure Dr. Fred wouldn't have done this if it weren't safe.
Laverne: After all, he is a doctor.
Meanwhile, Dr. Fred in the real world: It works! I can't believe it! And they said that an imitation diamond isn't good enough.
Fake diamond breaks.
Dr. Fred: Uh-oh...
Feedback

Day of the Tentacle

Laverne tells the player not to put a hamster in their mircowave.

Day of the Tentacle

Laverne tells the player not to put a hamster in their mircowave.