Never Wake Up a Sleepwalker 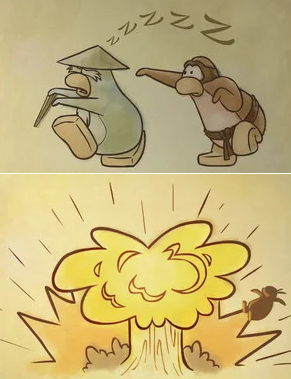 A Spontaneous Penguin Combustion may result!
Did you know that waking up a sleepwalker will cause severe shock and even death to the person?

Well... no, that's not actually true — it's an old wives' tale that still persists despite scientific evidence to the contrary. However, in TV Land, no one has heard this update (and some media predates this myth being busted), and so Hilarity Ensues as everyone else has to dance around whatever bizarre behaviours the sleepwalker exhibits, trying to avoid waking them up.

Nine times out of ten, this involves following them around and babysitting them all night long as they wander obliviously into mortal danger over and over again. One would think it would be much less dangerous to just wake them up rather than risk slipping up and letting that crocodile eat them.

But nope. It's too dangerous.

On the rare occasion where the characters are aware that this myth isn't true, the sleepwalker will usually be a Heavy Sleeper that can't be woken up, so they have to be babysat anyway.

Finally, to add insult to injury, the sleepwalker will almost always end their night of hilarious sleepwalking hijinks by walking right back into their own bed, and then immediately waking up bright-eyed and bushy-tailed, remarking that they had a wonderful night's sleep, as their companion collapses from exhaustion.