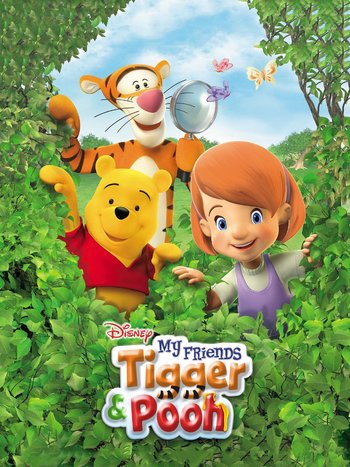 Now's the time to think think think.
"My friends, Tigger and Pooh
We're always there for each other
You'll see just how fun it can be
With so much in the Wood to discover
And if I need help on the way, Buster might save the day
Or Piglet, Lumpy, or Roo
Eeyore has a paw to lend, Rabbit has an ear to bend
Now all we're missing is you!"
— The show's "Do It Yourself" Theme Tune from the second season
Advertisement:

My Friends Tigger & Pooh is a CGI-animated edutainment series that ran on Playhouse Disney from 2007 to 2010. Created by Bobs Gannaway and based on the Winnie the Pooh franchise, the series follows the adventures of a 6-year-old girl named Darby and her puppy Buster, who join Pooh and Tigger in the Hundred Acre Wood. The group help solve mysteries together in the Wood by becoming the Super Sleuths and using their brain.

In the UK, the show received a British English dub that also aired on Disney Junior.

In August 2016, the show came back on Disney Junior's app and On Demand services, and later reran on the channel on September 12, 2016. It is now available on Disney+.

Another mystery is history!
Feedback

On account that Tigger is busy with many deliveries, he cuts the usual "Think, Think, Think" song short this time.

On account that Tigger is busy with many deliveries, he cuts the usual "Think, Think, Think" song short this time.