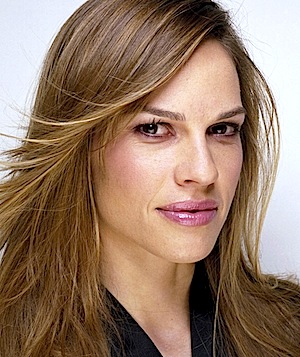 "Yay, I'm finally a complete person!" *BOOM*
"One of the great things about my job is I get to do all of these things that I may not experience had I not been an actor."
Advertisement:

Hilary Ann Swank (born July 30, 1974) is an American actress. While her interest started at the age of 9 when she starred in a stage production of The Jungle Book, her first appearance in Hollywood was a small part in Buffy the Vampire Slayer, followed by her first leading role as Julie Pierce, Mr. Miyagi's first female student in The Next Karate Kid. She has been nominated for two Academy Awards and won both times, for Boys Don't Cry and Million Dollar Baby.