Film / The Next Karate Kid 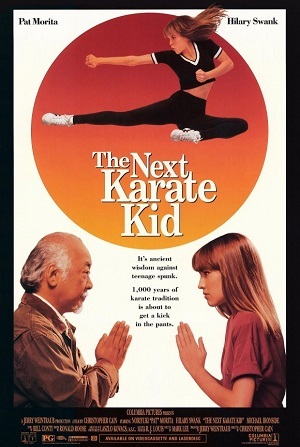 The fourth movie in The Karate Kid series, released in 1994.

Nine years after the last movie, Mr. Miyagi (Pat Morita) and Daniel have parted ways and the venerable old man found a new student to help, Julie Pierce (Hilary Swank), who is the maternal granddaughter of an army buddy of Miyagi's and his wife Louisa Pierce (Constance Waters), with the Pierce family grieving after the deaths of both Julie's mother and Louisa's daughter, Susan, and her husband. She is struggling with a para-military group that almost runs her high school, with the leader Dugan (Michael Ironside) just as ruthless as Kreese from the earlier films. This time he takes her to a local monastery to learn about peace of mind.