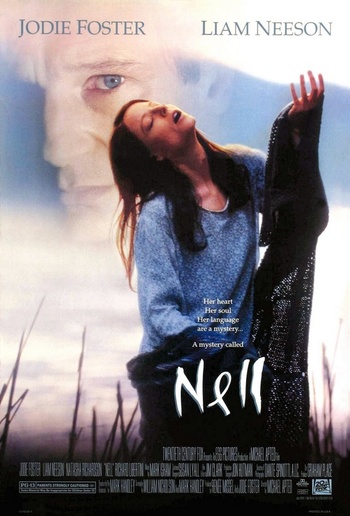 The movie opens with Dr. Jerome Lovell (Neeson) joining Sheriff Todd Peterson as they come upon a cabin deep in the woods of North Carolina and discover the passing of the only resident there. While looking around, Jerome comes upon Nell (Foster), who has had almost no experience with other humans. Nell speaks her own hybridized language and while she competently handles household tasks in the real world she is also living in a fantasy. Since she is of age, the local medical center want to have her come in for study, believing her to be a real Wild Child. (She's not. She was raised (lovingly) by her mother, socialized with her sister, wears clothes, cooks her food and lives in a house.)

A judge holds a hearing after Jerome spends some time observing Nell from afar. He decides to grant a three month continuance to further clarify whether Nell can live by herself in the cabin or has to go to a mental health center. The center sends Paula Olsen (Richardson), a psychology student, as a representative to observe and study Nell while Jerome takes it upon himself to continue to observe and study her as well.

Gradually, Jerome begins to interact with Nell and Nell soon begins to interact with both Jerome and Paula. They eventually learn from Nell that she had a twin sister who died when the pair were young. When a newspaper reporter learns of, and comes upon Nell in her cabin, Jerome and Paula decide it is safest to take Nell to the hospital. This decision is forced when a helicopter representing a television crew comes upon the cabin. When she arrives at the medical center, things go bad for Nell.

The movie resolves in a courtroom scene where the argument of Nell belonging in the mental health center or being able to live in her cabin comes to a head. The rights of an individual versus social management, preconceived notions and assumptions, and not judging by surface appearances are among the themes of this surprisingly complex film.