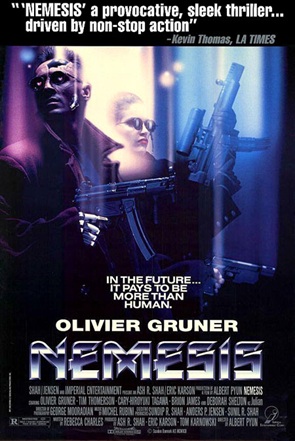 Jared: All right, Alex. Now this is gonna...
Alex: Sting a little? I know.
Jared: No, actually it's gonna hurt like a motherfucker.
Advertisement:

A cyberpunk movie from 1992 by Albert Pyun, starring Olivier "Poor Man's Van Damme" Gruner as a cyborg ex-LAPD officer. Unlike most cyberpunk movies, though, it mostly takes place in tropical Java. Gruner's character Alex is a washed-up cop turned courier who is contacted by his suspicious former superiors to find a rogue cyborg (also his ex-girlfriend) but it turns out it's mostly just an excuse to get him close to her so they can make him explode and kill them both. What follows is a long, protracted chase scene with a lot of exploding machinery and machine people.

It was followed by three sequels that take place several decades after the the events of the first film, which follow Alex's genetic offspring named after him, played by bodybuilder Sue Price.