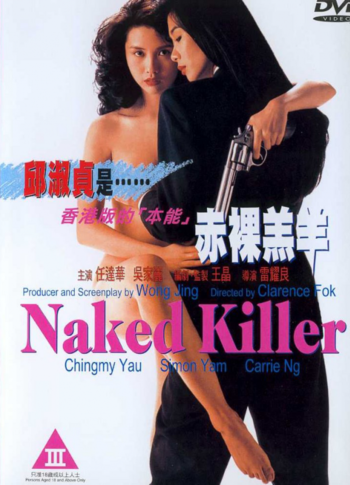 She's a killer, who kills in the nude. Talk about Exactly What It Says on the Tin!

Naked Killer is a 1992 Hong Kong film directed by Clarence Fok, starring former Miss Hong Kong Pageant and 90s sex symbol Chingmy Yau, in her Star-Making Role as the titular killer. Along for the ride is Simon Yam (of Bullet in the Head fame) as a police detective investigating her killings, only to inevitably fall for her.

Kitty (Chingmy Yau) is a fierce and violent young woman who had no qualms attacking men who cheated on their spouses or girlfriends, by stabbing their crotches, seeing herself as a vigilante for bullied women. But after an attempted assassination on a triad leader who killed her father goes wrong, Kitty ends up being rescued by veteran assassin Sister Cindy, who decides to take Kitty (completely against Kitty's will) as her protege.

Tinam (Simon Yam) is a cop and once the best sharpshooter in the Hong Kong police force, but after accidentally killing his brother as a rookie, he develops a crippling phobia of guns. And when he is assigned to investigate the many assassinations performed by Kitty, both cop and killer inevitably falls for each other... worse of all, an even more deadly female fatale, nicknamed Princess, who has a past vendetta against Sister Cindy, comes back with a vengeance, Tinam and Kitty will have to team up against their common adversary.

Considered a Cult Classic nowadays, mostly because of the amounts of steamy fanservice.

Simon Yam and Chingmy Yau would collaborate on a few more Hong Kong films in the 90s, such as Street Angels, Future Cops and Legendary Couple, although none of them are as notoriously popular (or controversial) as Naked Killer.

A decade later, Naked Killer would receive a Spiritual Successor, Naked Weapon, with none of the original cast returning.