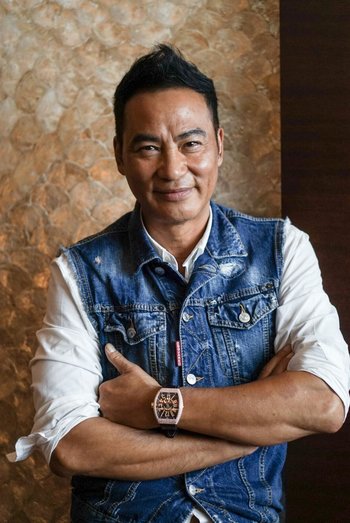 He might be one of the most prominent villain actors in Hong Kong, but damn, what a deliciously charming and wonderful smile!
Advertisement:

While Yam's most popular role in the west is arguably as the badass Luke in Bullet in the Head and the villainous Chen Lo in Lara Croft: Tomb Raider – The Cradle of Life, in Asia, particularly Hong Kong, Yam have a career starting ever since the 1970s when he was just 15 years old, and spanning for decades and decades where he is usually the go-to "bad guy" to be hired in Hong Kong movies, may it be action, horror, fantasy, slasher and the like.

In 2013, Yam released his directorial debut, Tales from the Dark 1, where he stars in one of the segments of the film.

Yam is married to Shanghainese-Austrian supermodel, Qiqi (known in Asia as a spokesperson for various beauty and facial products), with whom he have a daughter.